Just one delegate opposes and says party too strict on abortion 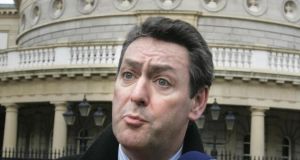 Fianna Fáil health spokesman Billy Kelleher said the party had to ensure it put its views on abortion legislation forward “in a collective approach” and have a “cohesive approach” to the issue. Photograph: Dara Mac Dónaill

Fianna Fáil members have urged the party leadership not to accept legislation that provides for the risk of suicide as grounds for abortion. During a debate on health at the party’s ardfheis, resolutions reaffirming its “pro-life” status were supported overwhelmingly.

Just one delegate spoke against the motions, saying the party was being too strict on the issue and fewer than 20 delegates voted against them. Party members opposed “any legislation which has the potential to be significantly expanded beyond the limited circumstances where an intervention is required to protect mothers”.

Delegates also opposed legislation introducing the “risk of suicide as a threat to life of the mother” and legitimising abortion in Ireland. And they backed a resolution that “reaffirms Fianna Fáil’s position as a pro-life party”.

A fourth motion calling for a constitutional referendum before any legislation was introduced to permit abortion or termination on the grounds of risk of suicide was not moved.

Roscommon delegate Lorcan Price said medical practice in Ireland was designed to protect the mother and the unborn child. He said the Government ignored the evidence at the Oireachtas hearings it convened to consider the evidence. “Psychiatrists said very clearly abortion is not a treatment for [threatened] suicide. It’s harmful to both the woman and child.”

Monaghan delegate Geraldine Smith criticised the National Women’s Council of Ireland for its “dismissive attitude” to the group Women Hurt. She said there was “no excuse” for an organisation part-funded by the State to shut out the voices of those who regretted their abortions. Fiona O’Hanlon, a GP from Cootehill, Co Cavan, said most of the reasons for the introduction of the 1967 British abortion legislation no longer existed, including lack of contraception, backstreet abortions and extreme poverty.

Too strict
Christina Murhill from Kerry, who was opposing, said the party was being too strict in dealing with the issue of abortion, especially in cases where a foetus was described as incompatible with life.

Mary Lou Doherty from Ballaghaderreen, Co Roscommon, said Lord Steele, architect of Britain’s abortion legislation, had said recently it would be a “mistake for Ireland to introduce abortion on the grounds of threatened suicide”. She said 97 per cent of 189,931 abortions in England and Wales in 2011 were performed on mental health grounds.

Kildare South delegate Eugene Doyle said the proposed Government legislation “is Labour’s and the pro-abortion lobby groups’ only foreseeable way of getting abortion on demand introduced in this country”.

Donegal Ógra Fianna Fáil delegate Yvonne McLoughlin said this was the most important issue facing the ardfheis because “no issue is more important than protecting life”. Health spokesman Billy Kelleher said they had to ensure Fianna Fáil put its views forward “in a collective approach” and the party had a “cohesive approach” to the issue.

Party leader Micheál Martin had earlier told reporters he did not believe there should be another referendum on the issue. He said the debate would inform policy decisions on the issue.