Fennelly report: Nobody emerges in a good light

Analysis: Despite FF threat on motion of no confidence, there’s no danger to Kenny’s position 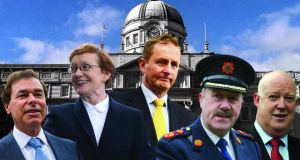 The argument from Government in the coming days will be that the only question worth dealing with is whether Taoiseach Enda Kenny attempted to sack, or did sack, former Garda commissioner Martin Callinan.

The interim report of the Fennelly Commission gives succour to those who seek to reduce the issue to such absolutes, yet it would be wrong to do so.

The commission accepts that “the Taoiseach did not intend to put pressure on the Garda commissioner to retire” and concludes there was never a question of a proposal being put to the Cabinet that Callinan be removed from office.

Yet, in its entirety, what the report presents is a string of incompetencies layered with dysfunctionality, made worse by the heat of political controversy.

At this stage, despite a threat from Fianna Fáil that it may table a motion of no confidence in the Dáil, there is no danger to Mr Kenny’s position.

While it once seemed the retirement of Martin Callinan could have been a threat to Mr Kenny, even his most strident enemies in Fine Gael say Fennelly’s conclusions mean any outstanding issues are now closed.

But it is not that simple. Nobody emerges from the interim report in a good light. It is riddled with conflicts of evidence and contradictions.

The clearest conclusion that can be reached is that not everyone interviewed by the commission left their agendas at the door.

The conclusions basically lay out a he-said, she-said approach. Callinan, Fennelly finds, “interpreted the message delivered to him” by then Department of Justice secretary-general Brian Purcell, sent by Kenny to the commissioner’s home, “with all its attendant circumstances, as an indication that he should consider his position”.

“In the view of the commission, that was a reasonable conclusion for the commissioner to reach. The commissioner decided to retire; he could have decided otherwise, but he did not wish to become embroiled in legal or other conflict with the Government.”

The report says that Purcell felt uncomfortable being sent out to Callinan’s home at 11pm at night to tell him of the Taoiseach’s concern about the taping of telephone calls at Garda stations.

What it points to is Government by hints and innuendo. If the Taoiseach did not want Mr Callinan to resign, he should have said so.

If he instructed Mr Purcell to tell Mr Callinan that he felt the commissioner may not have survived the following day’s Cabinet meeting, that arguably would also have been acceptable.

Purcell says that is the case, as does Callinan, yet Mr Kenny denies such a message was meant to be conveyed.

Even so, Martin Fraser, the secretary-general to the Government, said it did not escape him that one of the “outcomes of Mr Purcell’s visit to the commissioner was that the commissioner might choose to retire”.

Purcell says he was “shocked and concerned at what he was being asked to do”.

“He told the meeting on more than one occasion that it was wrong,” the report adds.

It should not be forgotten in all of this that Callinan was a political liability at the time. He had mishandled a number of crucial issues, not least picking fights with the Garda Síochána Ombudsman Commission (GSOC) and describing the Garda whistleblowers as “disgusting”.

Then minister for transport Leo Varadkar had described the whistleblowers as “distinguished”, undermining Callinan, and the Labour Party was limbering up to follow suit.

Callinan’s position was clearly under threat, and the taping issue - seemingly overplayed by Attorney General Máire Whelan - arrived in the middle of it all.

After Callinan announced his resignation, Kenny, according to the report, told then tánaiste Eamon Gilmore that “if he were asked in the House if he had confidence in the Garda commissioner, he would not be able to say that he had”.

It is seemingly clear that Kenny had problems with Callinan’s position. If he had, he could have credibly told Callinan it was unlikely he would survive that week’s Cabinet meeting.

In such a scenario, with a number of his ministers now pressurising Callinan, he would have been doing the commissioner a favour.

Resign or retire with dignity, or face the ignominy of having the Government publicly strip you of office, effectively.

Yet such a message was never communicated, even if the evidence points to the Coalition losing confidence in the commissioner.

Instead, the void was filled with assumptions and misunderstanding.

The report has shown the contradictions that emerge in such a scenario and while there may not be a silver bullet in Mr Justice Nial Fennelly’s report, almost all participants emerge diminished from its pages.