Fennelly report into Callinan resignation to be distributed 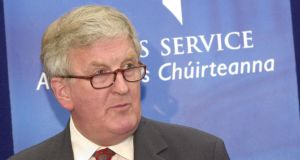 An inquiry into the Garda taping controversy is preparing to distribute its draft report on the resignation of former commissioner Martin Callinan following the conclusion of Ian Bailey’s High Court action.

The publication of the Fennelly Commission’s report on Mr Callinan’s resignation was delayed pending the outcome of Mr Bailey’s case but a spokeswoman on Monday evening said the “commission is preparing the draft report for distribution” to affected parties.

The commission of investigation is the centre of intense political interest, with Taoiseach Enda Kenny saying he will not break the law by commenting on reports he was recalled to give evidence on the events leading to Mr Callinan’s resignation.

Mr Justice Nial Fennelly is heading up the inquiry into the taping of phone calls at Garda stations and is due to provide an interim report on Mr Callinan’s March 2014 resignation.

Mr Kenny, Attorney General Máire Whelan and Martin Fraser, secretary general at the Department of the Taoiseach, are reported to have been called back by the Fennelly Commission to resolve conflicting evidence.

Mr Callinan resigned the morning after he was visited at his home by Brian Purcell, then secretary general at the Department of Justice. Mr Kenny instructed Mr Purcell to tell Mr Callinan of the gravity of the situation regarding the taping of phone calls at Garda stations.

Earlier this year, Mr Fennelly wrote to Mr Kenny - the minister responsible for the inquiry - and said he was mindful of the High Court case being taken by Mr Bailey.

He said that while the terms of reference of the inquiry into Mr Callinan’s resignation did not mention Mr Bailey’s case, “they are undoubtedly related to some extent with the events that culminated in the retirement of the Commissioner”.

“The Commission is of the view that it would not be appropriate to submit any parts of the draft interim report to named persons whilst the High Court proceedings are at hearing.”

It added that the interim report “will not be disseminated to affected parties until after the Bailey proceedings currently at hearing have been disposed of by the High Court”.

Mr Kenny’s spokesman declined to comment “on the workings of the commission”.

Fianna Fáil justice spokesman Niall Collins said he was hopeful the outcome of Mr Bailey’s case “can clear the way for the draft report of the Fennelly Commission”.

“It is one year since Mr Callinan’s controversial departure as Garda Commissioner and we still are none the wiser about what happened,” he said. “The Taoiseach and his advisors have engaged in bluff and bluster to deflect from answering basic questions - namely was the Taoiseach recalled to give evidence to the inquiry amid reports of conflicting accounts being presented to the judge?

“I fully respect the independence of Judge Fennelly and am hopeful that with the conclusion of the Bailey case he will now be in a position to publish his report.”