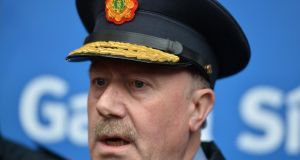 An interim report by retired Supreme Court judge Nial Fennelly on the resignation of former Garda commissioner Martin Callinan has been published.

What does the report deal with?

The report deals with Mr Callinan’s decision to step down for “family reasons” in March 2014.

On March 24th, then department of justice secretary general Brian Purcell was dispatched to Mr Callinan’s home to convey Taoiseach Enda Kenny’s concerns over the recording of calls.

A Garda commissioner can only be forced out of office by a Cabinet vote. The Taoiseach rejected the allegations and has welcomed the publication of the interim report.

When was the inquiry set up and what was the brief?

Mr Fennelly was appointed as the sole member of the commission of investigation on April 30th last year.

The commission’s brief was to investigate the events leading up to Mr Callinan’s retirement but only dates to the letter stamped March 10th, 2013, from Mr Callinan to Mr Purcell on the taping issue.

The letter warned then minister for justice Alan Shatter via Mr Purcell that the existence of the recordings had emerged during the discovery process in a high-profile legal case.

What else is Fennelly examining?

The commission is also conducting the first full formal inquiry into the Garda handling of the Sophie Toscan du Plantier case. Specifically, the commission will be empowered to establish if there is “any evidence of improper conduct” by gardaí.

The revelations that non-999 calls were recorded at several Garda stations going back to the 1980s will be looked into as well.

The commission sought information from solicitors who had experience, whether in the form of evidence or suspicion, that a telephone conversation between them and a client was recorded.

It will also establish the level of knowledge within other institutions of State, including the DPP’s office, the Attorney General’s office, and the Department of Justice of the taping practice.

These braches of investigation are not included in Tuesday’s interim report.