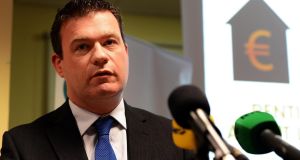 Minister for the Environment Alan Kelly: a spokesman for the department was unable to say whether it could intervene in the matter. Photograph: Eric Luke

More than 60 families in a west Dublin housing estate issued with notices to quit their rental homes could collectively ask the tenancies regulatory authority to decide on the legitimacy of the documents and delay any action, according to a spokesman for the Minister for the Environment.

The tenants live in the 208-property Cruise Park estate in Tyrelstown, now owned by the Goldman Sachs-owned vulture fund Beltany Property Finance, which has moved to sell the homes.

The vulture fund bought a €89 million loan from Ulster Bank to Vieira, a company controlled by property developers Michael and Richard Larkin and secured on the development and on the Tyrelstown Shopping Centre.

The developers had unsuccessfully taken a legal action against the takeover.

According to a report in The Sunday Business Post, a deal has been reached in which the occupants of all 208 properties face eviction.

The Larkins rented the properties rather than selling them when the economy collapsed.

The Minister’s spokesman said that if there was a question about whether the notices issued were in compliance with the Rental Tenancies Act, the householders could collectively refer the issue to the Private Rental Tenancies Board (PRTB), which would “delay and legally frustrate the process”.

He said it was “quite harsh to chuck this amount of people out at one time, and many potential purchasers could wish to work with existing tenants”.

If tenants were paying their rent in full and on time, “it’s possible the properties could be sold with the sitting tenants remaining in situ”.

The spokesman was unable to say whether the Department of Environment could intervene in the process.

The €89 million loan was part of a significant development loan portfolio known as Project Achill that the Goldman Sachs fund had purchased. The 60 tenants received a notice from Twinlite, a Larkin-owned company in February, which gave a final date to quit each property.

The prevalence of vulture-fund ownership of mortgage books has increased along with increasing pressure on indebted mortgage holders.

But a Department of Finance spokesman said the Minister for Finance had intervened to protect consumers through the regulation of credit services. The Government made the Consumer Protection (Regulation of Credit Servicing Firms) Act 2015 a priority piece of legislation, he stressed.

The legislation aimed to restore protections to consumers whose loans were sold to unregulated entities. “It does this by requiring the entities dealing with the borrower to be regulated.”

But Fianna Fáil Finance spokesman Michael McGrath criticised the act as “entirely inadequate” because it focused on those servicing debts on behalf of vulture funds.

“Vulture funds who outsource the administration of loan” could still initiate action for repossession or raising the interest rate “without actually being subject to regulation”.

Mr McGrath warned there was a very legitimate concern “that loans may be sold more than once with each subsequent transaction resulting in a deterioration of the conditions of the borrower in respect of the interest rate, penalty charges and the status of any restructuring arrangement”.

He also predicted “we are going to see more of these developments in the months ahead” unless concerted action was taken.

“There is a real risk now that action of this type will be stepped up once these funds feel that the political backdrop is more favourable for them.”

He said the new Dáil needed to amend the legislation to ensure any borrower who entered a restructuring arrangement “and who is sticking to it, cannot have that payment structure cancelled by the acquirer of a loan or an agent operating on their behalf”.

Earlier, Minister for Transport Paschal Donohoe described the notices issued to the tenants as “inappropriate” and “unfair”.

He said affected residents should be aware of their rights under legislation introduced last year, obliging all purchasers of mortgage books or multiple property loans to comply with a code of conduct.