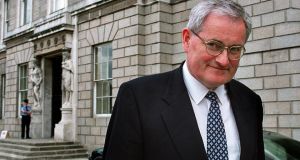 The practice of drafting constitutional amendments in English and then translating them into Irish should be reviewed, a leading authority has said.

Seán Ó Conaill, a law lecturer in University College Cork and an expert on the use of Irish in the Constitution, has said Irish translators were presented with English text already signed off by Cabinet and inflexible to change. He was responding to an issue raised in relation to the Irish version of the proposed amendment to the Constitution to allow same sex-marriage.

The English version is: “Marriage may be contracted in accordance with law by two persons without distinction as to their sex.” The Irish translation is: “Féadfaidh beirt, cibé acu is fir nó mná iad, conradh a dhéanamh i leith pósadh de réir dlí.”

Directly translated back into English it states: “A couple may, whether they are men or women, make a contract of marriage in accordance with law.” He said that other bilingual jurisdictions such as Canada and Wales had adopted a method of co-drafting where the laws were simultaneously drafted in both languages.

It allows for changes to be made to both texts which greatly aids the quality of the text in the minority language (and also in the majority language).

Several Irish-speaking lawyers and academics, including Mr Ó Conaill, Séamus Ó Tuathail SC and Galway-based solicitor Seán Ó Cearbhaill, have said a literal interpretation of the plural “fir nó mná” made a distinction between male couples and female couples, but did not include couples who were male and female.

Journalist Bruce Arnold has also argued in an opinion piece on irishtimes.com this would remove normal marriage from the Constitution and leave in it two forms of marriage only, both homosexual. He has contended this is a serious flaw.

Mr Ó Tuathail said that as a result of the use of the plural, “fir” and “mná, it could be that the amendment would explicitly permit marriage between men, and marriage between women, but not marriage between individuals of the opposite sex. Mr Ó Cearbhaill said the addition of the singular form – “cibé fear é nó bean í” – would have aided clarity.

It is pointed out the term “beirt” also appears in article 28.7.2 of the Constitution and is used to describe two members of Government who are clearly not a unit. The sources said previous use of “beirt” was a formula that allowed distinction between men and women as individuals and not just as couples.

Moreover, the phrase “cibé acu is fir nó mná iad’ is used as the translation for “without distinction of their sex” in article 16.1.2 of the Constitution, which sets the voting age of 18.

The sources said it would not be good practice to have one Irish expression for “without distinction of sex” in one part of the Constitution and a different expression in another part.

Mr Ó Conaill said the wording could be read so as to exclude heterosexual marriages. However, he said the court had used various methods when interpreting the Constitution, which included looking at what legislators wanted to achieve.

“One would imagine any purposive reading of this text would eliminate all fears that wording would unwittingly prohibit opposite-sex marriages,” Mr Ó Conaill added.

In the X case in 1993, the Supreme Court accepted the Irish version of the Eighth Amendment used a stronger phrase to vindicate the rights of the unborn. However, the court employed a purposive interpretation and followed the English version.