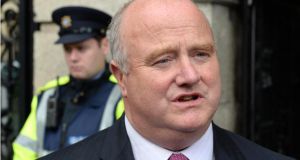 Billy Timmins, one of the Fine Gael TDs who defied the party whip to vote against the second stage of the Protection of Life during pregnancy bill. Mr Timmins said this morning the group of TDs and Senators expelled from the Fine Gael parliamentary party after voting against the Government on the abortion Bill is not a political party but will operate as a ‘loose alliance’. Photograph: Dara Mac Dónaill/The Irish Times

political party but will instead operate as a “loose alliance”.

Billy Timmins, who is a member of the so-called Reform Alliance, which includes Lucinda Creighton, Billy Timmins, Terence Flanagan, Denis Naughten, Senator Paul Bradford and Senator Fidelma Healy Eames, said the grouping was “not a party”.

He said the group does not have a brand or a logo and was made up of individuals who have been penalised for supporting a core Fine Gael value.

“We are a group of people who voted on what we saw as a core Fine Gael value and we have been penalised accordingly. But that’s fine. We accept that, we want to move on.”

“Certainly we have decided that we will operate as a loose alliance,” Mr Timmins told RTÉ’s Morning Ireland.

The Wicklow TD said the main purpose of the group was to “represent the views of the people that elected us” said there was no mechanism in place for group members to articulate their views in the Dáil.

He said Dáil structures were “very much weighted in favour of the established parties” and complained that his fellow group members do not have the opportunity to speak in the Dáil on matters concerning legislation and have also been “thrown off” Oireachtas committees.

“We find ourselves as a group of individuals who have been expelled from the parliamentary party and in an unprecedented policy the Taoiseach has stated that we will not be standing for Fine Gael in the next general election.”

His comments came after Galway West TD Brian Walsh earlier said he was opting out of the group as it was adopting the hallmarks of a political party.

The group was formed after Taoiseach Enda Kenny stated anybody voting against the Government on the Protection of Life During Pregnancy Bill would be expelled from the parliamentary party and would not be allowed to stand for Fine Gael at the time of the next general election.

The group first met last month and will discuss issues surrounding unemployment and welfare when it meets this weekend for a “think in”.

In reaction Tánaiste and Labour leader Eamon Gilmore rejected the suggestion that the new alliance might destabilise the Government on the back of policy disputes within in his own party.

“We have been very fortunate in the Labour party to have a parliamentary party, the overwhelming majority of whom have been very determined, very resolute in making the decisions that are necessary to get our country to recover,” he said, when asked this morning about the internal disputes in the Coalition parties.

“There have always been people who find it more comfortable to be in opposition than to be in Government. But this is a time not for the fainthearted. This is a time for the courageous, for the determined, and for people to hold their nerve and to see through what is necessary to get the country to recover.”

Tensions between the Coalition parties intensified last month when a group of five Labour TDs publicly criticised what it called “austerity junkies” in Fine Gael.