Expectations of political change have been utterly dashed 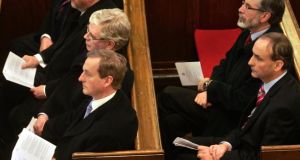 “While Fianna Fáil were the culprits in office, Fine Gael and Labour were complicit in the policies that caused the crisis.” Clockwise from left: Enda Kenny, Eamon Gilmore, Gerry Adams and Micheál Martin at the interdenominational service of prayer for the assembly of the 31st Dáil in St Ann’s Church in Dublin. Photograph: Matt Kavanagh

Four and a half years ago there was a prospect our political culture was about to change utterly. The culture that recklessly drove the country into the crisis that befell us in September 2008 seemed wholly discredited.

That culture pivoted the welfare of an entire society on an elite parasitic institution, banking, and when that institution floundered required the society on which it had preyed to rescue it at enormous cost. That culture drove excess, hedonism and self-interest among an elite; and, for many of the rest, a sense of exclusion and belittlement. That culture, which weakened already brittle ties of collectivity and solidarity, undermined the tax base and strengthened a sense of self-ownership — the conviction that what we “earn” from collective endeavour is ours alone.

It was that culture, far more than the failures or even recklessness of bankers, regulators and politicians, that caused the crisis, and some of us expected that an appreciation of this would lead to radical change in the culture, expressing itself in part by a rejection of the establishment parties exemplifying the culture: Fianna Fáil, Fine Gael and the Labour Party.


Collusion
For while Fianna Fáil were the culprits in office, Fine Gael and Labour were complicit in the policies that caused the crisis – all three parties colluded in damaging the tax base, all three agreed with the principle of the disastrous bank guarantee (yes, Labour voted against, but the party’s finance spokeswoman, Joan Burton and former leader Pat Rabbitte made it clear they agreed with the principle of the guarantee and differed only on the extensive powers the enabling legislation accorded the Minister for Finance) and in opposition, Fine Gael and Labour complained only that Fianna Fáil was not doing even more of the same.

Perhaps it was understandable that, at its first opportunity, the electorate would single out for special retribution the parties in government at the time of the crisis, Fianna Fáil and the Greens, and that the other parties complicit in the disaster would escape retribution then and that the profound cultural and political change would happen not in the election immediately following the crash but in the following one.

That is at least a reasonable interpretation of the Meath East byelection result and the succession of opinion polls published in the last six months.

The byelection outcome showed that of those who voted in Meath East, more than three-quarters (77.7 per cent) voted for the parties complicit in the debacle: Fianna Fáil, Fine Gael, Labour and the Greens. It also showed that the candidate in the election who offered the clearest alternative to complicit consensus, Séamus McDonagh of the Workers’ Party, who was supported by four TDs who designate themselves as “Left” (Richard Boyd Barrett, John Halligan, Thomas Pringle and Finian McGrath), got almost no support at all, just 263 votes.

A succession of opinion polls suggests that were there an election in the near future Fine Gael would get about 28 per cent of the vote; Fianna Fáil about 23 per cent; and Labour about 12 per cent: in total almost two-thirds of the vote and, probably, three-quarters of Dáil seats.

Several local factors contributed to Séamus McDonagh’s poor showing but the main reason is that the electorate does not perceive there is any credible alternative strategy to that of the establishment parties. Nor does the electorate perceive how complicit Fine Gael and Labour were in bringing about the crisis and in perpetuating the policies that have brought ruination to many parts of this society, and how false is the repeated claim of Government Ministers that they have to clean up a mess that was not of their making.

Yes, there is a prospect that the Labour Party will be routed in the next election, perhaps winning fewer than 10 seats, with the possible defeats of the likes of Eamon Gilmore and Pat Rabbitte (if they contest the election). But what point will there be to such a rout, aside from the satisfaction of retribution if, combined, the complicit parties win three-quarters of the Dáil seats? And even if Sinn Féin wins a bucket of seats from Labour, can it be trusted to do in coalition with either Fianna Fáil of Fine Gael other than what Labour has done in successive coalition governments? Remember Sinn Féin’s opportunist change of tack in the 2007 election campaign to cosy up to Fianna Fáil?

With the fracturing of the United Left Alliance over what seems to have been trivial and personal issues, the Left has even less credibility now than it had in the last election. And the language of the Left remains as alienating now as previously.

The expectation that the political culture would change utterly in the wake of the crisis has been disappointed utterly.