EU presidency due to rotate to UK in 2017 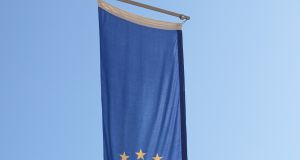 The holders the EU presidency are expected to drive the EU’s reform agenda while holding the role. Photograph: Getty Images/iStockphoto

The UK is scheduled to take on the Presidency of the European Union on July 1st of next year, at a time when the effects of its Brexit referendum result are likely to be the biggest issue confronting the union.

Under the treaty provision governing the departure of a member state from the EU, the departing state continues to take part in the work of the EU’s various bodies up to the date of its departure, but refrains from taking part in any discussions linked to negotiations as to its withdrawal or its future relationship with the union.

There is nothing in law that provides for a member state to relinquish its role in taking on the Presidency of the EU, which rotates among members and lasts for six months. What to do about the UK’s pending presidency is likely to be one of the early issues to be dealt with when it makes its formal application for departure and negotiations begin.

As part of the rotating presidency, senior officials from the state about to take on the role begin sitting in on key meetings six months prior to their state taking on the position. So, in the normal course, senior UK civil servants would start sitting in on key EU meetings from January 1st next year.

The departure of the UK is likely to be a huge, if not dominant issue at most important meetings.

Malta, a state seen as having a close relationship with the UK, is to take on the presidency from January 1st, 2017, and one possibility being discussed in the wake of the UK referendum results is that Malta would retain the presidency for a twelve-month term.

The holders the EU presidency are expected to drive the EU’s reform agenda while holding the role.