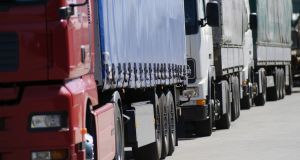 Council staff returned to work on Friday after the council examined a formal threat assessment report by police and also conducted its own safety assessment. File photograph: Getty

Trade unions have denied raising concerns about suspicious activity at port checks ahead of a council’s decision to withdraw staff from the inspection posts.

Mid and East Antrim Council withdrew environmental health workers from facilities at Larne Port on Monday night. The move came after threatening graffiti directed at those carrying out new checks on goods arriving from Britain.

Police have blamed the graffiti and menacing online comments on disgruntled individuals and small groups.

Officers have characterised the incidents as “low level” and have insisted there is no evidence of wider paramilitary involvement in threats. They said there was nothing to substantiate claims of number-plate details being gathered.

TUS secretary Alan Law, on behalf of the three unions, wrote to Mr Johnson asking him to withdraw his comments.

The letter, it is understood, notes Mr Johnson’s reference to trade unions.

“In this statement you attribute remarks to the trade unions,” Mr Law wrote.

“As this was an official statement issued on behalf of council at the monthly meeting please would you clarify which trade union made this claim as neither Nipsa, GMB nor Unite did, and we absolutely distance ourselves from these remarks and request that they are withdrawn and the official record amended.”

Mr Law has also written to council chief executive Anne Donaghy asking for clarification on a range of issues relating to the decision to withdraw staff.

Council staff returned to work on Friday after the council examined a formal threat assessment report by the Police Service of Northern Ireland and also conducted its own safety assessment.

Inspectors employed by Stormont’s Department of Agriculture were also withdrawn from duties on Monday evening. That move affected both Larne and Belfast ports.

The department has not yet made a decision on their return.

EU officials overseeing the implementation of the new checks were also withdrawn from duties on Monday. – PA