Skypixels Ireland filmed this stunning drone footage of the Poolbeg Chimneys in Dublin. Dizzying heights and a fascinating glimpse into a national landmark. Video: Skypixels 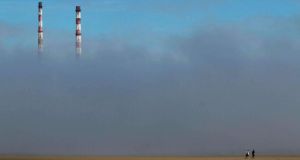 The ESB chimneys at Poolbeg: Dublin City councillors have called for them to be listed as protected structures, while the conservation section of the council has commissioned an architectural historian to research and report on them. Photograph: Nick Bradshaw

The ESB has deferred making a decision on whether to knock down the Poolbeg chimneys in Dublin, but says it is carrying out repair work to ensure they do not fall into further disrepair. ESB chief executive Pat O’Doherty warned last year that it “may not be possible” to leave the famous chimneys standing and a decision would be made by the end of 2014.

Mr O’Doherty, in a letter to Leo Varadkar, then minister for tourism, said carrying out the structural and repair works needed to keep the 680ft high twin stacks may not be the best use of resources.

The old power station in Poolbeg ceased operation in 2010. News of the possible demolition of the chimneys led to some public calls for the structures to be kept. However, in a statement, the ESB said no final decision had been made but a company in Britain had been commissioned to draw up a “structural assessment report”. This should be completed by the end of March and would feed into the “ongoing review”.

“In order to protect the chimneys from further deterioration, ESB is committed to carrying out some remedial works, which includes capping the towers, and arrangements are currently being made for this work to be completed by April 2015,” the statement added. This means putting a cap on the top of each chimney to protect the structures for deterioration.

Dublin City councillors have called for them to be listed as protected structures. The conservation section of the council has commissioned an architectural historian to research and report on the chimneys.

The report is expected to be completed by the end of January, and conservation officials will then examine its findings. The southeast area committee of Dublin City Council has also requested a report, but this is unlikely to be completed until March.