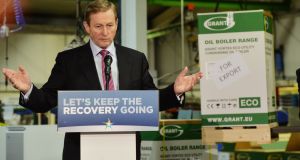 Taoiseach Enda Kenny has insisted Fine Gael will not change its message or strategy despite a series of poor opinion polls for the party.

He said there was no “plan B”, and the party’s only proposition was to re-elect a government of Fine Gael and Labour.

He denied he was concerned about the continuing slump in the polls, but admitted the challenge for Fine Gael was to sell the message of recovery.

“Complacency is the real enemy here. If people assume you are going to have three, four or five per cent growth rates by electing whoever you wish that is not the position. There is no coherence in the opposition parties or groupings that are there.”

The latest opinion polls show Fine Gael down two points to 26 per cent over the last week.

Strategists said the message would remain the same, but the party would seek to highlight the “weakness of the Independents”, the “fairytale economics” of Sinn Féin and Fianna Fáil’s “past” in the final week of the campaign.

Speaking in Co Offaly, the Taoiseach said he was confident that people would reflect very carefully before voting.

He was “sure” the people would back a government of Fine Gael and Labour.

Mr Kenny said he was aware the recovery was not being felt by everyone, and the Coalition needed a second term to fix that.

The election, he added, was never going to be a “doddle or a cakewalk”, and every constituency would be a challenge and a “dogfight”.

He said he understood the anger voters might be feeling, but advised them not to make a bad decision by voting on the basis of their emotions.

“This, in my view, is the most important election that I have ever stood in because there is a real danger that Irish voters will sleep-walk into making a decision that they will regret for a great number of years to come.

“I understand the hurt that people have felt, I can understand the anger, but this is an election where people need to use their brains and not their emotions.

“We have a contrast, then, to other parties who have no plan, whose track record has been dismal, and who will not deliver the dividends that are needed.”

The Taoiseach also ruled out coalition with Fianna Fail, insisting the party had not learned the lessons of the past.

He also ruled out single-party government, saying he preferred coalitions.