Emigration story by far the most important of modern Ireland

Column: We may mark the bicentenary of the Famine knowing we are still living its demographic legacy 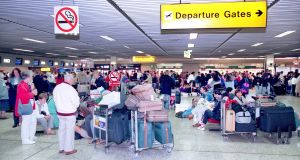 Imagine the populations of Cork, Galway, Limerick and Waterford cities put together. They amount to about 400,000 people. That’s about the number of people who will be absent from the Republic of Ireland in 2026 if things continue as they are going. If emigration remains at the levels it has reached because of economic collapse and so-called austerity, the long-term effect will be monumental.

If we pull the camera well back from the details of contemporary Irish life, we see a society still struggling to recover from the effects of the Great Famine of the 1840s. This isn’t a mystical whinge about the legacy of trauma. It’s plain fact. If you want to understand why Ireland is not a “normal” western European country, consider what happened to its population.

In 1841, the area that is now the Republic had just over 6.5 million people. By 1911, the population had shrunk to less than half that number in just 60 years. And it continued to decline until the early 1960s: in 1961, there were just 2.8 million people in the 26 counties. Since then, there has been a slow and uneven rise, but we’re still not back to the levels reached in 1841.

This is by far the most important story of modern Ireland. It’s not as colourful or dramatic as the rise of nationalism, the break with Britain or the legacy of ethnic division. But it has done more than any of those factors to shape our towns, villages and cities, our landscapes and our attitudes, our politics and our culture. At the core of the story – after the immediate shock of the Famine – is a habit, an impulse, a way of responding to the world: the urge to emigrate. Since the late 19th century, very few emigrants have been forced to go. They’ve weighed “home” against “away” and found the homeland wanting. Its familiarity hasn’t been sufficient compensation for its limitations on economic and personal opportunity.

Many historians and economists – Joe Lee, Lars Mjoset, Raymond Crotty – have pointed out that this habit of mass emigration became self-fulfilling. It created a vicious circle. People left because the society was too entrenched and lacking in innovation to hold them. But in turn, the emigration of those who didn’t fit made Irish institutions more entrenched and under less pressure to innovate. Conservatism encouraged emigration and emigration reinforced conservatism.

The consequences go deep. We discovered in the boom years that Ireland was bringing to bear on 21st-century problems a 19th-century mentality (machine politics, cronyism, an obsession with land). Emigration had stunted the processes of organic cultural change that might otherwise have created a society mature enough not to be mesmerised by the baubles dangled in front of its eyes.

Now we’re spinning again in the vortex of this vicious circle. In a recent report, the Central Statistics Office tries to project what the population might be by 2046. The gap between the highest and lowest possibilities is utterly startling. It might be 6.7 million or it might be five million.

That difference of 1.7 million people is just short of the entire current population of Northern Ireland. And by far the biggest factor in determining which scenario comes closest to reality is net migration. The extent to which people, especially young people, continue to leave will determine the whole nature of the place.

It is poignant to note that the benign scenario of 6.7 million would mean that, two centuries after the Famine, Ireland had finally recovered from its greatest modern catastrophe. And equally poignant to note that, if trends continue, we will mark the bicentenary of the Famine in the knowledge that we are still living its demographic legacy. In one future, we have broken out of the vicious circle. In another, we are as deeply trapped within it as we ever were. The difference between one possibility and the other is enormous: psychologically, economically, culturally. Either we are left with the sense of inherited doom that makes us so irresponsible (why change things when we’re destined to fail anyway?) or we are, in a sense that has never applied to date, a free people.

Which of these futures seems more likely? At the moment, official policy is doing everything possible to ensure that it’s not the benign one. The young are being penalised with high unemployment and, if they have jobs, with worsening conditions. A quarter of today’s children are being raised in poverty. Phenomenal levels of public debt are being left to those same children to pay off. Perhaps just as importantly, the society has shown no capacity for radical political, institutional or cultural change. The old habit has reasserted itself: emigration substitutes for change and the lack of change reinforces emigration. Without a radical shift of direction, the Famine will continue into the next generation.

1 When the RIC opened fire on a crowd in Ennis during the Clare grain riots
2 Portraying Sinn Féin as a dangerous party is a political strategy
3 Coronavirus: Almost 60 new cases recorded in Italy as two die
4 High risk of flooding along river Shannon as rainfall warning issued
5 Floods in the midlands: ‘If this was happening in Dublin it would be front-page news’
Real news has value SUBSCRIBE