Election will not be called before Labour conference, says Coveney 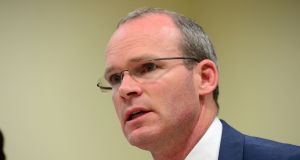 Minister for Agriculture Simon Coveney: “I know people are dying to get going in this election and that’s fair enough but there’ll be no election called tomorrow night.” File photograph: Dara Mac Dónaill/The Irish Times

Minister for Agriculture Simon Coveney has ruled out an election date announcement until after the Labour Party’s national conference and thinks it “probable” Taoiseach Enda Kenny will do so in the Dáil.

He did not think there would be any announcement at the end of the Fine Gael ardfheis on Saturday night, about which there has been some speculation.

He also said “the Labour Party have their national conference next weekend and I’m certain that will go ahead.

“I know people are dying to get going in this election and that’s fair enough but there’ll be no election called tomorrow night,” the Minister said.

Speaking before the start of the ardfheis he suggested it was probable Mr Kenny would announce the election in the Dáil “but that would be his call”.

Mr Coveney said: “You don’t have to announce an election in the Dáil but let’s wait and see.”

He added: “I’d be surprised if he didn’t do it in the Dáil but that will be totally up to him.”

He said the ardfheis was about unifying Fine Gael behind a very clear message.

“Our message to the electorate is clearer than anyone else’s. It’s very simple: Ireland is in recovery. Our economy is growing again. We’re creating about 1,400 jobs a week. We’re moving in the right direction quickly . . . and if you want to keep that recovery going, then Fine Gael and Labour working together are best placed to do that.”

Hitting out at the Opposition he said the promises some parties were making about spending on services were hollow “because they have no record of facilitating economic growth”.

He said: “Fianna Fáil actually drove the economy over a cliff and in Sinn Féin’s case I’ve never heard them speak about economic development in a credible way.

He said the message to the electorate was: “If you believe Ireland is recovering and moving in the right direction then stick with a party that you know will keep that going.”