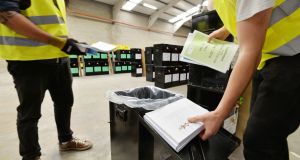 A long-promised permanent electoral commission moved a step closer after the Government approved the general scheme of a Bill to create an independent authority.

The commission will regulate and supervise all matters related to voting and the administration of elections and referendums.

It will be made up of commissioners with a broad range of experience and expertise, a number of whom will be chosen through an independent public selection process, and appointed by the President.

Successive governments have been repeatedly criticised for their failure to create a permanent regulator and the State’s ethics and electoral watchdog, the Standards in Public Office Commission (Sipo), has described current electoral laws as out of date, incoherent and with little capacity for enforcement.

Sipo made a detailed critique in a submission during a public consultation process by the Department of Local Government on the proposed commission.

The ethics body recommended a statutory agency with limited powers initially, which should incorporate all of Sipo’s current responsibilities.

Under the proposals announced on Monday by Minister for Local Government Eoghan Murphy and Minister of State for Electoral Reform John Paul Phelan, the new authority will take on responsibility for the referendum commission.

The general scheme, or introductory outline of the legislation, also provides for the proposed new authority to take responsibility for the register of political parties, for the constituency commission which determines the boundaries of Dáil and European election constituencies in Ireland, and for local electoral area boundary committees which adjudicate on the boundary divisions in local elections.

The authority will have responsibility for voter education, which could include advertising to encourage more of the electorate to turn out to vote. And it will have a research and advisory function to inform government and the Oireachtas about reform of electoral law. Further powers and functions will be added over time.

The announcement follows approval of legislative proposals for ground-breaking changes to the electoral register including the use of personal public service (PPS) numbers to confirm voters’ identities, the creation of a single voter database and provision for online registration and for pre-registration of 16- and 17-year-olds until they reach the legal minimum voting age of 18.

Mr Murphy said Government approval for the general scheme moved a commission “closer to fruition” and it would be a “more cohesive approach to the management of a wide range of electoral processes”.

Mr Phelan described the general scheme as a “blueprint for an effective and efficient independent electoral body”.

Pressure has mounted over the years for a commission with numerous reports on the issue including a 2016 Oireachtas document compiled by the then environment, culture and the Gaeltacht committee.

Anomalies over party funding and donations, and the High Court challenge by Amnesty International against a Sipo demand that it refund a donation from a George Soros-funded foundation, highlighted problems with the current system.

The general scheme of the Bill now goes to the Committee on Housing, Planning and Local Government for pre-legislative scrutiny after which a Bill will be drafted.