Cork North-Central candidate was elected on the first count 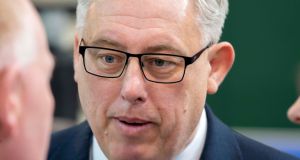 It may be his third attempt to win a Dáil seat but Cllr Thomas Gould has done it in style, topping the poll with the help of the Sinn Féin surge.

He first ran for the seat in 2016 alongside Jonathan O’Brien, who stood down at this election. In the November byelection caused by the election of Fianna Fáil TD Billy Kelleher to the European Parliament, he took a solid 19.7 per cent of first preferences, an indication of his subsequent success.

He is councillor since 2014, originally for the north central area of Cork city and for the north-west ward since the 2019 local elections.

From Knocknaheeny, he works as a logistics manager and lives in Gurranabraher with his wife, Michelle Gould, a PE teacher, and two daughters.

He is chairman of St Vincent’s GAA Club and founder of Cork’s northside schools coaching initiative. A member of the board of management of Gurranabraher and Churchfield community centre, he is on the board of the Firkin Crane and Gaelscoil Pheig Sayers.