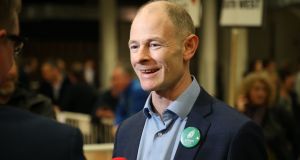 Ossian Smyth (48) was first elected to represent the Green Party on Dún Laoghaire-Rathdown County Council in 2014 and served as Cathaoirleach of the council between 2018 and 2019.

He was relected in 2019 when he topped the poll with more than 3,000 first preferences.

He attributes his electoral success not just to the green wave but to a “lot of spade work” done as a local politician.

He has been particularly vocal on the issue of the pollution of Dublin bay and has also sought to promote the development of social and affordable housing.

Clearly keen to play a part in the formation of the next Dáil he said there were no coalition “untouchables” as far as his party was concerned.

He works as a technical project manager in Saint Vincent’s Hospital and has volunteered as a mentor at a local CoderDojo, teaching young people computer programming and other technical skills.