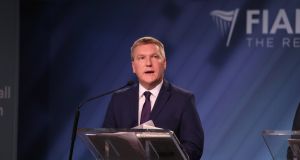 Michael McGrath will be on the team in any coalition-formation talks. Photograph: Garrett White/ Collins Agency

Another heavy hitter in Cork South-Central Michael McGrath (43) was the party’s finance spokesman when Fine Gael was in coalition with Labour and again for the past four years.

The chartered accountant from Carrigaline is a low-key, calm and effective spokesman and after such a long time doing the job in opposition, will be keen to have the role in government. A constituency rival and colleague of his party leader and seen as a potential successor, he is popular with his colleagues and has a well-oiled constituency organisation.

He will be on the team in any coalition-formation talks.

An assured Dáil and media performer, he is seen as having a forensic eye for detail. While sharply critical of Government mistakes, unlike some party colleagues he does not engage in political mudslinging.

In the last Dáil he introduced or played a key role in a number of private member’s Bills and motions in the financial arena. He is married to Sarah O’Brien and they have seven children.