Election 2020: McDonald says it is ‘not sustainable’ to exclude SF from government

Varadkar insists Fine Gael is ‘not compatible with Sinn Féin’, and rules out entering coalition 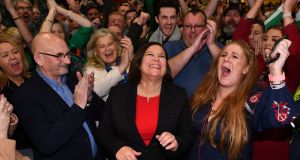 Sinn Féin leader Mary Lou McDonald celebrating with supporters in the RDS after taking a seat in Dublin Central on the first count. Photograph: Ben Stansall/AFP via Getty Images

Sinn Féin leader Mary Lou McDonald has said she wants a “government for the people, ideally with no Fianna Fáil or Fine Gael”.

The Dublin Central TD said she had started contact with the other parties to “explore over the next days whether that is a possibility”.

Ms McDonald said she did not accept talk of Sinn Fein being excluded from government given its share of the vote, and has consistently said she will “talk to and listen to everybody”.

Ms McDonald said it was “not sustainable” for either Fine Gael leader Leo Varadkar or Fianna Fáil leader Micheál Martin “to say that they will not speak to us”.

She said she was not shocked by the surge in support for Sinn Féin, and acknowledged that the party should have fielded more candidates.

“This election was all about change. Sinn Féin went to the people and we convinced them in large numbers that we are the alternative, we are the vehicle for change.”

Taoiseach Leo Varadkar said Fine Gael was “not compatible with Sinn Féin”, and ruled out entering a coalition.

“We are willing to talk to other parties about how we could form a government and give this country a government that can spend the next five years dealing with the problems that we have had to tackle for the past few years,” Mr Varadkar said.

The Taoiseach said Ms McDonald had not been in touch, “not at this stage anyway”.

“She has not been in touch with me yet; we would talk on occasion. I understand she has said she is seeking to form a left-wing coalition which does not include Fianna Fáil or Fine Gael.

“I am not sure that is possible on the numbers, so it is going to be a number of weeks before we are in a position to form a government.”

Fianna Fáil leader Micheál Martin said for any coalition to be sustainable, there had to be “compatibility in terms of the programme for government”.

“It has to be coherent and it has to be sustainable and deliverable. They’re very significant issues that can’t be glossed over in the euphoria of an election day and all of the tension, interest and excitement around it,” said Mr Martin, who has previously rejected entering coalition with Sinn Féin.

“So I think over the next number of days people will assess that situation in terms of such a policy platform.”

Mr Martin said the country was now entering into a “different, fragmented political landscape” which was going to make the formation of a government “very difficult”.

“Today is a day for election, the people have spoken today, I respect that,” Mr Martin added.

Green Party leader Eamon Ryan said he had missed a call from Ms McDonald, but that the party has always said it wanted “to talk to everyone”.

“The real change we need is to tackle climate change and the biodiversity crisis, and that has to involve everyone, every place matters.

“If people have elected someone as their representative, our sense is well to talk. Obviously I think it’s very difficult to see what kind of government can be formed. The numbers don’t make it obvious.”

Labour leader Brendan Howlin said Sinn Féin must now “step over the threshold and take the reins of power”.

Mr Howlin conceded Sunday had been “a bad day for Labour”, with the party struggling to retain its seats. He said he expected Labour would not feature as part of the government following a “disappointing day”.

“The numbers won’t add up for that. We have to see how many seats the Labour Party has. It’s about what a government does, not who is in it.”

1 Coronavirus: Cabinet to assess ‘stay at home’ measures as 50,000 deaths expected worldwide
2 Coronavirus: Should everybody be wearing masks to combat Covid-19?
3 ‘Everyone still thinks it’s a joke’ - parents of toddler with coronavirus speak out
4 ‘It’s Sinn Féin against the rest’: NI Executive in conflict over coronavirus
5 Coronavirus: Trump’s tone changes as US faces brutal loss of life
Real news has value SUBSCRIBE