Carlow-Kilkenny – Elected on the eighth count 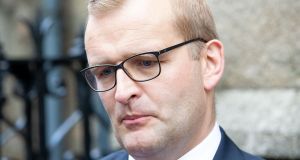 John Paul Phelan most recently hit the headlines when he described some members of the Green Party as ‘nutters’. Photograph: Tom Honan for The Irish Times

Farmer, TD and Minister of State for Local Government and Electoral Reform John Paul Phelan most recently hit the headlines when he described some members of the Green Party as “nutters”.

He was also in the news over a 2016 boundary division row when then Fine Gael minister of state Paudie Coffey took a libel action, settled last year, against publishers of the Kilkenny People over an article in which Phelan accused his colleague of trying to “rob” a chunk of his area of the constituency.

A TD for nine years, the 41-year-old was the youngest member of the Seanad in 2002 where he served two terms until his 2011 election to the Dáil. He served as a Kilkenny County Councillor from 1999 to 2003 and holds an economics degree.

One of his last actions before the dissolution of the Dáil was to get Government approval along with his senior Minister for legislation to establish a permanent referendum commission and to conduct major reform of the electoral register.