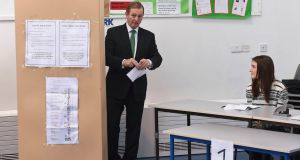 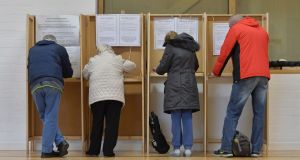 If the final result is close to the exit poll the Fine Gael/ Labour coalition will be far off the numbers required to form a majority government. Photograph: Alan Betson/The Irish Times

The Coalition parties have fallen far short of an overall majority in the next Dáil, according to an exit poll conducted for The Irish Times by Ipsos, MRBI.

Fine Gael support has slumped from 36.1 per cent in the last general election to only 26.1 per cent – a far worse result than the party anticipated at any stage of the campaign.

The poll indicates the Labour Party received just under 8 per cent support, far behind the 19.5 per cent it achieved at the 2011 general election.

The Coalition parties did not benefit from a swing in the final days of the campaign, according to the poll.

Fianna Fáil appears to have made a significant recovery since the last election and is could almost double its number of Dáil seats.

Support for Sinn Féin has increased since 2011. There are also big gains for Independents and smaller parties.

At the last general election in 2011, Fianna Fáil took 17 per cent of the first preference vote and Sinn Féin 10 per cent.

In Dublin, Fine Gael has emerged as the largest party with 25.7 per cent of the vote, followed by Sinn Féin with 15.4 per cent, according to the poll. Fianna Fáil is on 14.6 per cent, Labour 9.4 per cent and others received 34.9 per cent.

The 2016 General Election Exit Poll was conducted exclusively on behalf of The Irish Times by Ipsos MRBI, among a national sample of 5,260 voters at 200 polling stations throughout all constituencies in the Republic of Ireland.

Voters were randomly selected to self-complete a mock ballot paper on exiting the polling station. The accuracy level is estimated to be approximately plus or minus 1.2 per cent.

If the final result is close to the exit poll predictions, the Fine Gael/-Labour Coalition will be far short of the numbers required to form a majority government.

Based on a smaller sample of 4,283 voters, the RTÉ poll found Fine Gael and Labour suffered significant losses with gains reported for Fianna Fáil and Sinn Féin.

At the last election Fine Gael got a seat bonus of 10 per cent. In the unlikely event of a similar seat bonus this time, it would end up with 56 seats. But a more likely seat bonus of 5 per cent would give the party 50 seats. The new Dáil has 158 seats, eight fewer than in the last one.

It is even more difficult to predict the number of seats the Labour Party will win if it takes just under 8 per cent of the vote. It is likely to be in the range of eight to 12.

One thing that could benefit the party is that the poll indicates very strong transfers from Fine Gael to Labour.

Fianna Fáil, on 23 per cent, should come close to, or even surpass, its target of 40 seats, which would represent a remarkable achievement for party leader Micheál Martin.

Sinn Féin on 14.9 per cent also looks like it could make reasonable gains. Even with no seat bonus, the party should be able to break into the 20s range.

The poll results will come as a severe disappointment for both Government parties even though they are very close to the figures they have been getting in Irish Times polls for the past year or so.

The expectation in the Coalition parties was that they would gain support as the election got closer and voters weighed up the merits of stability versus change.

That message did not resonate with the voters and the outcome will generate uncertainty about who can form the next government.

The turnout in the election appears to be down on the 70 per cent figure achieved in 2011. Party sources estimated it might be about 65 per cent.

Turnout was described as “uneven” in the run-up to the polls closing, with politicians claiming many people were still undecided up to the last moment.

The counting of votes begins at 9am today, with the first counts expected to be announced in the late afternoon.