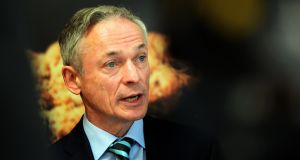 Minister for Education Richard Bruton: “Few areas are more pivotal than education to our ambitions as a nation.” Photograph: Eric Luke

A plan to make improvements in the education system and counter the effects of disadvantage will be launched today by Minister for Education Richard Bruton.

The aim of the Action Plan for Education is to make the Irish education and training system the best in Europe by 2026.

Radical changes in the system of apprenticeships and training will be one of the features of the plan to cater for the changing employment needs of society in the coming decades.

The plan will outline hundreds of actions to be implemented over the next three years with a particular focus on disadvantage, skills, and continuous improvement within the education service.

The plan builds on the model of the Action Plan for Jobs, pioneered by Mr Bruton during his five-year tenure as minister for jobs in the last government.

The Action Plan for Education outlines hundreds of actions and sub-actions to be implemented between now and 2019, with timelines and lead responsibility assigned.

Publication of quarterly implementation reports and continuous consultation with stakeholders and members of the Oireachtas will remain central to the process. Tackling educational disadvantage will be a key feature of the plan while a new plan for the Deis schools, which cater for children in the most disadvantaged areas, will be published by the end of the year.

This plan will be aimed at ensuring that Deis schools hit the national norm for retaining pupils in the education system within the next decade.

“The basic aim of this Government is to use our economic success to build a fair and compassionate society,” said Mr Bruton, speaking ahead of the launch.

He said the plan would mean better opportunities for more people from disadvantaged groups, as well as ensuring that more sustainable well-paying jobs were created.