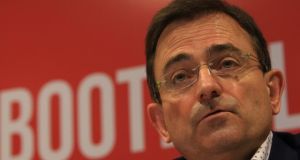 Recruiter for Reboot Ireland Eddie Hobbs has said that the group is on course to have 60 candidates available for the next general election. Photograph: Nick Bradshaw/The Irish Times

The as-yet-nameless political party known as Reboot Ireland is on target to have 60 available candidates for the next general election, its recruiter Eddie Hobbs has said.

The financial commentator and advisor said the proposed party, founded in part by former Fine Gael TD Lucinda Creighton, has had 600 people put themselves forward for candidacy to date.

“We will have a candidate selection process now starting which will take several months . . . I think the core number of people that have both the intellectual capacity and the passion and the energy to do it will probably come in at around 60, and that will allow us to compete in every single constituency with at least one [candidate] and in some cases two. That’s our target and we’re on target”.

Mr Hobbs said a lot more “flesh will come on the bones” in the first week of March when the party will be launched officially, by which point it will have a name, code of conduct, charter and constitution.

He said a fundraising team and a national candidate selection team had already been put in place and that detailed policies were being devised and would be in place by the next general election.

Mr Hobbs said it was “unlikely” that he would run as a candidate himself due to existing business commitments. However, he did not rule out the possibility altogether.

Speaking at the Trinity Economic Forum 2015 this morning, Mr Hobbs said a change was occurring in Ireland with an intolerance of the old stock and the old ways of doing things.

Referring to the Economic Management Council, Mr Hobbs said: “Ireland is run by a politburo made up of four ministers and four civil servants, that’s the Government. They tell the Cabinet what to do. The Cabinet tell the Oireachtas what to do. The Oireachtas might as well be out playing golf. We have the most dysfunctional democratic model in Europe”.

Mr Hobbs said it was important to look to the future whereas the Irish political establishment are still looking back:

“They are about to look back in a big way next year in the centenary [of the 1916 Rising]. To me it’s just a nightmare because everybody’s going to start looking back again instead of saying, hold on a second, it’s this way we need to be looking, not that way”.