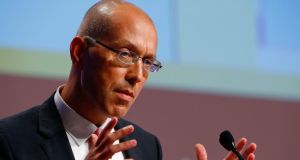 ECB executive board member Jörg Asmussen said leaving the bailout without a credit line meant Dublin did not meet conditions for the bank to buy Irish debt under its bond-buying programme. Photograph: Ralph Orlowski/Reuters

The European Central Bank has said the Government would need to seek and receive a new round of formal aid from the European Stability Mechanism rescue fund before it could consider buying Irish bonds to stabilise a crisis.

In remarks to The Irish Times, ECB executive board member Jörg Asmussen said leaving the bailout without a credit line meant Dublin did not meet conditions for the bank to buy Irish debt under its bond-buying programme.

Mr Asmussen’s intervention, in response to questions to a bank spokesman, comes after Minister for Finance Michael Noonan said Ireland was neither at an advantage nor disadvantage over the ECB’s Outright Monetary Transactions initiative. “Ireland would need to apply for a new EFSF-ESM macroeconomic adjustment programme or precautionary programme to be considered for OMT.”


Full-blown rescue
Mr Asmussen is a central figure in Ireland’s bailout and exit strategy. His remarks suggest OMT aid could not be considered without a precautionary credit line or a full-blown rescue programme, with conditions required in both cases.

Mr Noonan has described a credit line as a necessary but not sufficient condition for OMT and noted that such a facility does not itself guarantee access. In Brussels last week, however, he said: “Not having a precautionary programme doesn’t give us any advantage about OMT in the future, but it doesn’t give us any disadvantage either if there’s a systemic risk across the euro zone.”

National Treasury Management Agency chief John Corrigan has suggested the decision did not rule Ireland out from OMT aid.


OMT eligibility
Mr Asmussen said the decision to leave the bailout without precautionary credit “has not changed the position of the country”. “Ireland was not eligible for OMT and will not be after the 1st of January. As the ECB’s press release of September 6th, 2012, clearly states: having a full or a precautionary EFSF/ESM programme (an ECCL) is a necessary condition for a country to be eligible for OMT, provided that they include the possibility of ESM primary market purchases,” he said. “Ireland’s decision not to apply for a precautionary programme means it currently does not fulfil this necessary condition.”