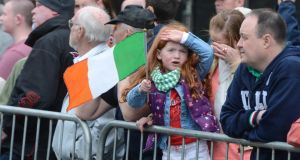 There should be a “shameless celebration” of the Easter Rising centenary whatever government is in power in 2016, the Fine Gael national conference has been told.

UCD Professor emeritus of history Ronan Fanning said there must be a “recognition of historical reality”.

In the 1976 celebration of the 200th anniversary of the American Declaration of Independence, “did the American government shrink from the bicentenary of the decisive moment in the birth of the United State because that state was born out of war,” he asked.

“Does the French government shrink from the annual celebration of Bastille Day notwithstanding the appalling bloodshed of the French Revolution?”

He said “we should insist that whatever government will be in power, must unwaveringly lead the nation at home and abroad in unabashed celebration of the seminal moment in the birth of the Irish Republic”.

However much “we may condemn political violence we cannot dispute that it is an invariable component in wresting independence from colonial powers”.

In an address at a debate on Ireland 2016 he said the fact “that the birth certificate of this State, in common with that of so many other states, is stained with blood must not mean that 2016 cannot be an occasion for shameless celebration”.

Minister for Foreign Affairs Charlie Flanagan warned however that “we cannot allow the centenary commemorations themselves to become a divisive issue”.

He told the liveliest discussion at the party conference in Castlebar, Co Mayo that “there is a nervousness across many political representatives and community leaders in the North about the centenary of the Rising and how it will be commemorated”.

In a political context “where the annual marking of a 1690 battle can still lead to violence on the streets, this anxiety should not be surprising or underestimated”.

They should encourage a collective North South approach to respecting each others’ key commemorations.

And he reiterated comments of the commemorations advisory group: “The aim should be to broaden sympathies, without having to abandon loyalties.”

Confirming there would be no member of the British royal family in attendance at events, Mr Flanagan said they needed to consider what events “it may well be appropriate to invite our international partners, at a suitable level, to join with us to reflect on the events of 1916”.

Minister of State for the Diaspora Jimmy Deenihan said of Fine Gael that “as a party we have come from 1916”.

He said language would be very important in the commemoration and he too said that 2016 should be a “commemoration not a celebration”.

One speaker from the floor warned however that “when you overdo sensitive, you arrive at apology”.

Another said the party had been on the “back foot” in its approach to 2016 and needed to take ownership of it.

One speaker from the floor criticised the lack of action on a pledged restoration of Teach an Phiarsaigh in Rosmuc in Connemara.

He said not a sod had been turned on the site and it might not be completed by the end of the decade of commemorations “never mind by the end of 2016”.

A suggestion was made from the floor that every house in the country should be issued with a copy of the 1916 proclamation.

And there was a round of applause when another speaker said the debate should have taken place in the main auditorium, rather than in a sideroom and it should have been on television, in reference to the live morning coverage on RTÉ.

Professor Fanning agreed and said “this shouldn’t be tucked away in a corner”.

Minister for Arts, Heritage and the Gaeltacht Heather Humphreys told the conference “we need to reclaim our flag”.

During a speech in which she outlined plans for commemorative events, Ms Humphreys highlighted plans for school projects including learning about the Irish flag and what the green, white and orange represented.

She said it was “unfair that some have used our flag to portray a different message and we need to reclaim our flag and can do that through our schools and children”.

The events would also include a military parade past the GPO on O’Connell Street on Easter Sunday, “where relatives will play a key role”,

She said there would be a special State reception for relatives on Easter Saturday, an interfaith Service at St Mary’s Pro-Cathedral on Easter Monday and a commemoration at Arbour Hill on the actual date of the Rising - Sunday April 24th

“We will remember the 1916 signatories and all those who fought and those who lost their lives in the Rising in a fitting and appropriate way.”

And she pledged that the Irish language should be at the heart of 2016 events. “Let’s make 2016 the year of Irish.”