Eamon Gilmore: Workers Party councillor from Galway who went on to lead Labour

Gilmore first elected in 1985 as a Workers Party councillor 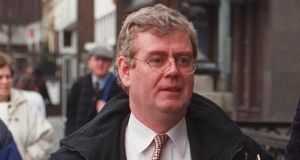 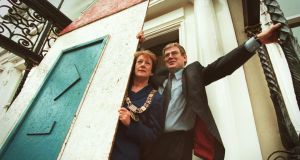 The then lord mayor cllr Mary Freehill and Labour deputy Eamon Gilmore at the Mansion House in Dublin in 2000. Photograph: Frank Millar

It is a strange twist of politics that Eamon Gilmore began his political career by helping to bring the Labour Party to its knees in the 1985 local elections and ended up losing the leadership of the same party after its disastrous performance in the same elections almost 30 years later.

Mr Gilmore was first elected to Dún Laoghaire Borough Council in 1985 as a Workers Party councillor. Labour, then as now in coalition with Fine Gael, was the target of attacks from left-wing opponents, including the Workers Party.

Labour had a terrible election in 1985. Then, as now, it won just 7 per cent of the vote but it was the launching pad for Mr Gilmore’s political career that culminated in his becoming Tánaiste and Minister for Foreign Affairs in 2011.

A native of Caltra, Co Galway, Mr Gilmore was born in 1955, the son of a small farmer. Educated at the local national school and at Garbally College, Ballinasloe, he attended University College Galway, where he became active in student politics.

After serving as president of the students’ union, he joined Sinn Féin the Workers Party, which in time became the Workers Party and then Democratic Left. He worked as a trade union official with Siptu before being elected to the Dáil in 1989.

He was appointed as a junior minister in the rainbow coalition from 1994 until 1997 and became a Labour Party TD when the party merged with Democratic Left in the late 1990s. Strong debater

He contested the Labour leadership in 2002 but was beaten by fellow former Democratic Left TD Pat Rabbitte and was elected unopposed as party leader when Labour failed to win office in 2007.

Mr Gilmore carved out a reputation for himself as a strong debater in the Dáil but really came into his own after the onset of the economic crisis in 2008 with persistent attacks on then taoiseach Brian Cowen who he at one stage accused of “economic treason”.

His performances in the Dáil in 2009 and 2010 made Mr Gilmore a respected national figure and for a considerable period he had the highest rating of any of the party leaders in opinion polls.

Mr Gilmore was so successful by the summer of 2010 that there was panic in Fine Gael and an attempt was made to remove Enda Kenny as leader.

However, by the time the general election came around in February 2011, Fine Gael had recovered and Labour was panicked into making a series of electoral promises in a drive to prevent Fine Gael from winning an overall majority.

Mr Gilmore hinted strongly that Labour would burn the bank bondholders, saying it would be “Labour’s way or Frankfurt’s way”. Breaking promises

Those promises and Mr Gilmore’s performance in opposition came back to haunt him when he entered Coalition with Fine Gael and was obliged to implement a series of measures designed to restore the economy to health.

Although the strategy brought economic stability, it entailed breaking many of the promises made in opposition. Mr Gilmore’s standing in the polls slumped and the party’s performance in the local and European elections precipitated his decision to step down as party leader.