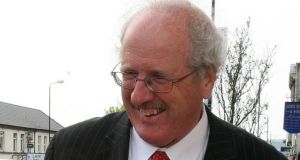 Jim Shannon of the DUP on the election trail: he has a particular interest in “protecting Christians” who face “persecution across the world”. Photograph: Paul Faith/PA

When Jim Shannon looks out at Strangford Lough the day after the general election there is a strong chance he will have been comfortably returned to Westminster to represent the constituency he champions as the most beautiful in the UK.

The DUP veteran believes if people living in the Strangford constituency “want a safe pair of hands and a hardworking MP”, there is only one person to vote for on May 7th.

“What I offer is 30 years of political experience,” he said.

Mr Shannon (60) lives in Greyabbey on the Ards Peninsula, and has been busy over the last five years in the constituency and in the Commons after he won the safe DUP seat once held by Iris Robinson, the wife of party leader Peter Robinson.

In 2010, Mr Shannon claimed 45.9 per cent of the vote, seeing off a challenge from the now Ulster Unionist Party leader Mike Nesbitt, who stood at the time for the disastrous UUP-Tory project UCUNF (Ulster Conservatives and Unionists – New Force). 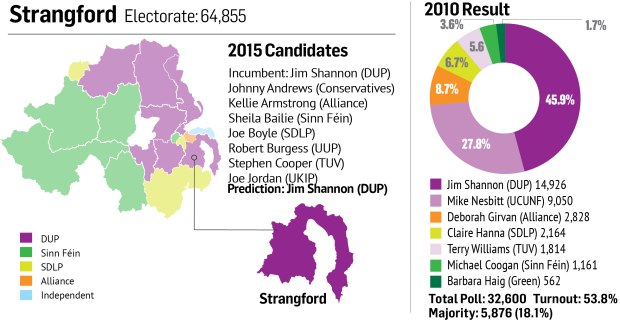 But Mr Shannon is confident voters will put their faith in him and the strong DUP party machine. “When it comes to constituency work, I believe no one else can touch me, touch this party, my colleagues, the MLAs and councillors who we work closely with, to deliver a level of service that nobody else can.

“My record at Westminster tells its own story. I am a hardworking MP taking issues to the floor of the house, making sure people hear about them and making sure ministers can respond.”

The pretty constituency, home to the rolling hills of mid-Down, Scrabo Tower and Mount Stewart estate, takes in towns such as Ballynahinch, Comber, Newtownards and Portaferry, and villages including Saintfield and Killyleagh.

Mr Shannon complains that “the bureaucracy of Europe seems to strangle” the fishing industry, and fishing towns such as Portavogie were suffering. “Farming is a big issue for us as well and also the dairy industry because we are at the heart of the milk industry here in this constituency.”

He said working with the new Ards and North Down “supercouncil” on regeneration of town centres was another area requiring careful attention.

On the international front, Mr Shannon said he had a particular interest in “protecting Christians” who face “persecution across the world”.

He also wants continued support for the British army: “Defence spending should be ringfenced and ensured.”