Enda Kenny has revealed that Stormont executive will not sit for September to 'settle down and focus' on the ongoing issue of IRA status. 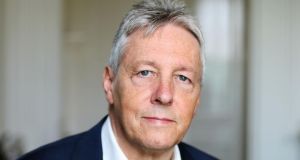 The Democratic Unionists - led by First Minister Peter Robinson - have been defeated in a bid for a four-week adjournment of the Northern Ireland Assembly to allow for political negotiations, a party spokesman said. Photograph: Brian Lawless/PA Wire.

The DUP leader Peter Robinson has called for the return of the Northern Assembly to be adjourned for four weeks to facilitate comprehensive talks that might resolve the current crisis over alleged IRA involvement in the murder of Belfast republican Kevin McGuigan.

The DUP on Tuesday afternoon put forward a proposal to the Stormont business committee to put back the return of the Assembly, which is due to resume in plenary session on Monday, for four weeks to determine if the current crisis threatening the Northern Executive and Assembly can be resolved.

A DUP spokesman said the business committee refused that request. A senior Stormont source also said that the plenary session was not due to go ahead as originally scheduled.

Mr Robinson said he will ask in Downing Street later for British prime minister David Cameron to “suspend the Assembly (for four weeks) to facilitate the talks process”.

“If the prime minister refuses to suspend the Assembly we will take unilateral action,” Mr Robinson told The Irish Times on Tuesday afternoon.

On Tuesday evening he said that he and his party were open to talks to try to resolve the crisis.

He warned that if Stormont fell “it would create a vacuum which would be exploited by violent elements on all sides”.

He again condemned the murder of Mr McGuigan and said it was carried out by “low life criminals who are attempting to destroy this peace process and who are absolutely no friends of the Sinn Féin leadership”.

In Dublin, the Taoiseach indicated that he believed Mr Robinson would be granted his request. The Northern Ireland Executive will not sit in September, said Mr Kenny.

The First Minister refused to say whether his threat of “unilateral action” if the Assembly was not adjourned would mean the DUP following in the footsteps of the Ulster Unionist Party and withdrawing from the Northern Executive. Such a move would make Stormont administration virtually untenable.

“We are not going to indicate what unilateral action would mean until we have exhausted the other options,” said Mr Robinson.

Pressed on what it might mean he said: “What we have said is that we are not prepared to do business as usual. These issues have to be addressed. Until they are it will not be normal business in the Assembly and Executive.”

Mr Robinson made clear that comprehensive talks should not only address the PSNI chief constable George Hamilton’s assessment that IRA members were involved in the murder of Mr McGuigan and that the IRA is still in existence, but the implementation of the stalled Stormont House Agreement.

The Stormont House deal was agreed last Christmas but was put on hold after Sinn Féin in March said it could not live with British government welfare proposals.

Asked what Sinn Féin could deliver to get politics back on track, Mr Robinson replied that it would be dealt with in the intensive talks he has requested.

He said the current arrangements on dealing with paramilitaries were “inadequate”.

“Here we are in 2015 and the paramilitary organisations are still in place, and all the paraphernalia around that. Criminality and terrorist activity has to be brought to an end. We have to tackle these issues,” he said.

The DUP leader said he saw merit in the reactivation of the Independent Monitoring Commission, or a similar body, to adjudicate on the status of the IRA and other paramilitaries.

Mr Robinson said he did not see any benefit in holding Assembly elections should Stormont break down because of the current crisis. He said politicians would just return to the same problems after elections while in addition politicians “would take up positions during the election that would push parties further apart”.

The First Minister indicated that there was still a chance of safeguarding Stormont and dealing with the issue of the IRA and also other issues such as welfare reform. “If we get over the obstacle of dealing with the big issue there is no reason why the talks process could not bear a result in a six-week period,” he said.

Asked about his own view of the threat posed by the IRA, Mr Kenny said it was clear from the chief constable’s remarks that IRA members remained involved in criminality, but not terrorist activity.

“Clearly people who were involved in the Provisional IRA have drifted into criminality of one sort or another,” he said. “Obviously the statement made by the PSNI chief constable is one that is central to the appraisal being carried out by the Commissioner of the gardaí and obviously we will monitor that very closely.”

Mr Kenny also criticised Sinn Féin and called on leader Gerry Adams to do more. “It’s not satisfactory to me that we have a situation where we have evidence of safe houses that were used for sexual abuse by republicans.

“It’s not satisfactory for me merely to be calling for anybody out there with information to come forward, obviously, those who were involved in those years know many names and they should be in contact with those names so that the law of the land can apply and so that in many areas, on the border in particularly, that people are not afraid to open their mouths.”