Local authority to decide on the rate charged to 240,000 householders for 2017 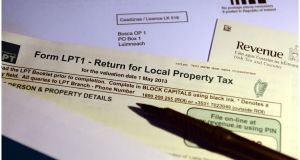 The rate of local property tax charged to almost 240,000 Dublin householders next year will be determined on Thursday by Dublin City Council.

Council chief executive Owen Keegan has urged councillors to increase the amount of tax each homeowner pays in order to generate almost €12 million extra for council services next year.

Councillors last year voted to cut the rate of property tax charged to homeowners by 15 per cent, the maximum discount permissible.

Mr Keegan wants councillors not to grant that discount for 2017.

Dublin city homeowners, by far the State’s biggest payers of property tax, paid €50 million in property tax in the first half of 2016, with some 92 per cent of liable households having paid their bill so far.

The amount of tax paid is based on the value of the property on May 1st, 2013.

However, councillors in each local authority area have the power to decide to increase or decrease the rate charged in their area by up to 15 per cent each year.

Their decision holds for one year only and if no notice of change is given to Revenue by September 30th, the charge reverts to the standard rate.

This would generate an additional €11.92 million for the council’s coffers, to “protect and enhance council services”.

Councillors in Fingal and Dún Laoghaire councils last week voted to cut the rate of property tax by 15 per cent for 2017.

South Dublin County Council will decide on the matter next week.