Dublin and London want NI parties back in talks 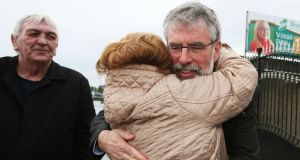 The Government is making preparations with British and American support to bring Northern parties back to the table this summer for a new attempt to settle questions about the past, flags and parades.

Moves to revive the talks follow political turmoil over the PSNI’s detention of Sinn Féin president Gerry Adams for questioning about the 1972 murder of Jean McConville.

Dublin will await the outcome of European and local elections this month before pressing ahead with the new initiative. However, it is being cast as a fresh attempt to revive proposals developed by retired American diplomat Richard Haass on which the parties failed to strike an agreement in the last round of talks on New Year’s Eve.

Denied
Mr Adams has denied any involvement in Ms McConville’s murder but the PSNI is sending a report to the North’s Public Prosecution Service.

He was released on Sunday night amid escalating political tension with the DUP over Sinn Féin’s response to the arrest. However, Tánaiste and Minister for Foreign Affairs Eamon Gilmore said yesterday a window of opportunity for progress may open up this summer.

He said this could emerge between the elections, which take place in little more than a fortnight, and the beginning of the loyalist marching season in July.

While Mr Gilmore spoke by phone for 15 minutes yesterday with Dr Haass, a source close to the Tánaiste said there was no formal discussion about his possible return for a new round of talks.

Outcome
However, the two men resolved to await the outcome of the elections and speak afterwards. The source said Dr Haass told Mr Gilmore he was very eager to stay informed about developments in the North and eager to stay involved.

Both men agreed the Haass proposals on the past, flags and parades were still the “best means” of dealing with these questions, the source added, and went on to say that Mr Gilmore had said American involvement and engagement was very important for the process.

On RTÉ Radio yesterday, Mr Gilmore insisted the last talks had not failed and said there was still potential for progress based on proposals tabled by Dr Haass. “There may well be a role for him again,” said Mr Gilmore.