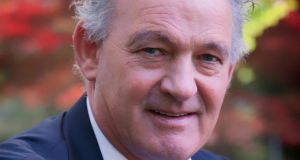 Dragons Den entrepreneur Peter Casey who said on Tuesday that he intends to contest the upcoming General Election as an Independent candidate.

Mr Casey, from Derry, set up a business in 1995 in Atlanta, Georgia. He has been living there with his wife Helen, from Crumlin in Dublin, and their five children, but returns to Ireland once a month.

He has recently bought a home in Donegal and is looking for a Dublin base.

He is considering contesting the election either Donegal or a Dublin constituency.

“I’m not going to stand to lose. I’ll do an assessment and make a decision as to where is the best place to have the possibility of success,” he said.

“Donegal would be where my heart and natural inclination would be but realistically I’m going to be spending a lot of time in Dublin.”

He is the founder and executive chairman of Claddagh Resources, a global recruitment business that matches high-level executives with consulting and IT firms.

Claddagh operates from five locations worldwide and its European base is outside Buncrana in Co Donegal.

Turning to the current political situation, Mr Casey said his assessment was that the Fine Gael/Labour Party Government had performed “fairly well” given the circumstances they faced upon entering office.

“Some things they have done badly but overall I’d probably give them a B [grade].

“People seem to have forgotten just how bad things were,” he said.

“In fairness to the current Government I think they have performed fairly well.”

Mr Casey said he had studied Lucinda Creighton’s proposal for a new party. However, he had not spoken to her about it and observed a policy platform had not been put forward as yet.

“She’s obviously a very talented lady but I never buy a house off the plans.”

He previously established business interests in Australia and Ireland. Mr Casey was named by Irish America Magazine as one the leading Irish American businessmen for 2007.

In the last two years, he has bought houses in Derry before they were repossessed by banks and leased them back to the occupants. He now holds 16 such properties.

“We basically buy them before the banks foreclose and we enter into a long-term lease with the tenants.

“It’s a win-win. It means people are able to stay in the property. I get a much better return than what I was getting on money sitting in the bank and I’ve got an appreciating asset.”