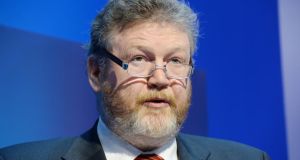 
Minister for Health Dr James Reilly has opened up the possibility of having some form of children’s hospital heart services that would operate both in Dublin and Belfast.

Dr Reilly, during the course of a joint visit to cross-Border health and care services in Fermanagh and Louth yesterday, discussed the issue of children’s heart surgery on the island of Ireland with the DUP Northern Minister of Health Edwin Poots.

The issue has generated considerable controversy in Northern Ireland because of a proposal to transfer all children’s cardiac surgical services from Belfast to the Crumlin children’s hospital in Dublin.

On Tuesday the Northern Assembly adopted a motion calling for the retention of children’s heart surgery in Belfast notwithstanding a recent report which found that while safe, the service at the Royal Belfast Hospital for Sick Children was no longer sustainable.

Mr Poots favours a two-centre approach where more serious cases would be dealt with in Dublin and more minor cases in Belfast. He said this however would require the agreement of the Department of Health. Mr Poots indicated yesterday that there was resistance to such a system from the Health Service Executive.

At the new South West Acute Hospital in Enniskillen yesterday Dr Reilly was asked was there some potential room for manoeuvre that might allow for such a dual system. “Absolutely. I think we should explore all the potential and all the possibilities. It is in all our interests to do so … We want the best for our children both sides of the Border,” he said.

Dr Reilly, however, said there was a certain level of such surgical activity required to maintain the viability of a children’s surgical cardiac centre of excellence.

“When it comes to cardiac surgery, particularly for children, there is a volume issue in order to maintain the expertise. But I would hope very much that we can accommodate in every way the surgical team in Belfast and ensure that as much surgery is done up there as can be done safely without compromising the expertise that is required.”

Mr Poots said the two-centre system, which he preferred, would “require almost certainly patients from the likes of Donegal coming to Belfast for surgery whilst the more complex surgery would end up in Dublin. I need the cooperation of my counterparts in Dublin to agree to that.”

Both Ministers, who spent a considerable part of the day together , expressed their continuing commitment to practical cross-Border health co-operation.They later visited the Men’s Shed in Dundalk and the Louth County Hospital in the town as part of getting first-hand experience of other cross-Border Co-operation and Working Together projects.