SF wants an end to ‘campaign against the community’, but how serious is the threat? 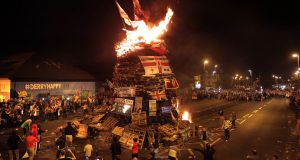 The bonfire built at the bottom of the Lecky Road flyover, on the road in Derry’s Bogside, marking August 15th is lit late on Monday night. Huge crowds attended and election posters of nationalist and unionist politicians were burned. Photograph: Margaret McLaughlin

Twenty years ago, in August 1996, a statement in the name of a Continuity IRA army council highlighted a new threat to the Northern Ireland peace process. That threat from dissident republicans remains to this day.

Back in 1996, the statement was a so-called claim of responsibility that followed a bomb explosion at a Co Fermanagh hotel several weeks earlier.

At the time the mood in Northern Ireland was already bleak. In February that year the IRA ceasefire had collapsed.

There was also the tension and the political and community fallout of the July marching controversies followed by the bomb attack on the Killyhevlin Hotel in Enniskillen in July 1996.

Alongside the threat from the IRA, there was now this other dissident threat.

The Continuity IRA had previously been linked to a couple of small bomb incidents, but this was something on a completely different scale, described as a “military operation against an economic target”.

“We automatically thought it was the mainstream IRA that carried it out,” Tom Elliott, a former soldier in the Ulster Defence Regiment (UDR) and now Ulster Unionist MP for Fermanagh South Tyrone, tells The Irish Times.

But, the next day, he spoke with “a few Sinn Féin people”.

“They were absolutely furious,” he says. “They saw unionism and Orangeism on a back foot [because of marching decisions and disputes] and thought the bomb had let them off the hook.”

Twenty years on, Elliott does not believe that the dissidents, now under several organisational titles, can derail the peace process.

“Dissidents are, broadly speaking, a fallout from the mainstream IRA, but they are an entity on their own,” he says.

“It was there in 1996 and is still there. It’s that offshoot of the IRA doing their own thing, but still getting some help from mainstream republicans.”

Evidence of the continuing threat is seen in a recent arms find in Lurgan, Co Armagh, which is now being linked by security sources in the North to one of the Continuity IRA factions.

But in 2016 it is another of the dissident groups, often described as the “New” IRA , that poses the “major threat”.

In Northern Ireland the threat assessment remains “severe”, while in Britain several months ago the security service MI5 raised the threat level there to “substantial”. It means a dissident republican attack is “a strong possibility”.

“They [the New IRA] have quite a broad reach as a group . . . a very experienced leadership with previous PIRA [Provisional IRA] experience,” an intelligence source in Belfast says.

This group is an amalgamation of dissidents, including the organisation once known as the Real IRA.

Today the dissident threat stems from this coalition as well as other standalone groups such as Óglaigh na hÉireann and the Continuity IRA. This latter faction is very different from that which declared itself in the statement of August 1996. Since then the Continuity IRA has splintered and fractured.

An intelligence assessment dating back to 2009 described internal wrangling over leadership as a “convulsion”.

“It comes down to people who haven’t got on with each other all their lives,” one source said at the time.

Also in 2009, police constable Stephen Carroll was shot dead in a gun attack claimed by the Continuity IRA. Despite the divisions the threat remained.

In 2014, a former leader of the organisation in Belfast, Tommy Crossan, was shot dead.

Months later, after a lengthy surveillance and listening operation, several men linked to the leadership of one of the Continuity IRA factions were arrested.

Intelligence and security operations on both sides of the Border have also significantly disrupted the group Óglaigh na hÉireann (ONH).

“Lots of disruption, lots of success by the guards and ourselves. That has diminished the threat [from this group] but not diminished it to the point that we are not concerned about it any more. ONH wouldn’t have the leadership resilience of the other groups,” a security source in the North says in a reference to recent arrests on both sides of the Border.

It was a “headline” attack deliberately timed to coincide with the transfer of policing and justice powers from London to the Stormont Executive.

Months later, in November 2010, the leadership of the organisation boasted in a newspaper interview that “nothing is beyond our reach” but many of their planned attacks have either been abandoned or interrupted.

This has become the familiar pattern: dissidents stopped in their tracks.

After arrests and disruption, “they sit down and take stock,” a security source says. “Some will regroup more quickly than others.”

Security sources in the North believe that about 100 dissidents are now in “command and control” of the different organisations, with “a couple of hundred” active in what is described as “the operational tier”.

This is an intelligence assessment of the combined strength of the so-called New IRA, Óglaigh na hÉireann and the Continuity IRA factions.

“The threat wouldn’t be assessed at ‘severe’ if the operational tempo wasn’t high across the groups,” an intelligence source says.

That said, there is no suggestion from police or intelligence sources that these groups can re-create the level of activity associated with the IRA in the period from the 1970s into the 1990s.

Security sources link all the dissident organisations to criminality.

This means “smuggling, low-level robberies, a range of criminality and, to some extent, local taxation/licensing [of drug dealers]”.

“We are faced with old rhetoric rehearsed and rehearsed again,” a police source says.

“These groups are entitled to oppose Sinn Féin; however, their campaign against the community must end,” Adams said. “We are willing to meet with these groups and lay out our strategy and vision for the future. If these groups had any integrity, they would enter into dialogue with us.”

He was speaking after a number of recent incidents where dissidents were blamed for threatening members of Féile an Phobail, the west Belfast festival.

Dissidents were accused of picketing the Féile an Phobail offices, of defacing hunger strike posters and of erecting bonfires this week in the Falls, Twinbrook and New Lodge area of Belfast and in the Bogside in Derry “in defiance of the wishes of the community”.

In April, SDLP leader Colum Eastwood, former senior police officer Peter Sheridan and Roisin McGlone, an independent member of the Policing Board, all told The Irish Times they would be prepared to talk to dissidents.

“If it is about stopping violence and killing, why would we not try?” McGlone asked at the time.

“Anywhere else this would be referred to as gangsterism. Nobody yet has framed or articulated the political thought or rationale for dissident activity.”

In the 20 years spanning August 1996 to August 2016, the dissident threat has always been there. It has never gone away, but that threat has never been at the level, or even close to the level, once associated with the mainstream IRA.

There have been periods in which there have been bursts of activity, but never anything that could be called a sustained campaign.

Brian Rowan is the author of the recently published Unfinished Peace