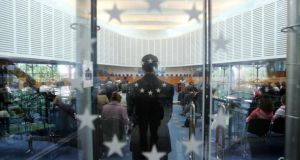 In 1976, following a case taken by the Dublin government, the European Commission found the interrogation of the 14 men amounted to ’inhumane treatment and torture’ Photograph: Olivier Morin/AFP/Getty Images)

The European Court of Human Rights and other official bodies investigating alleged torture of prisoners by the British army and RUC in the early part of the Troubles were deliberately not told where the so-called “five interrogation techniques” were being carried out, it has been claimed.

Sarah Duddy, from the Pat Finucane Centre in Derry, has said documents from the public records office at Kew in London about the “Hooded Men” show information relating to the interrogation barracks at Ballykelly in Co Derry was withheld from the European Court and from the European Commission on Human Rights.

In 1976, following a case taken by the Dublin government, the European Commission found the interrogation of the 14 men amounted to “inhumane treatment and torture”. In January 1978, the European Court lessened this judgment to “inhuman and degrading treatment”.

“We argue that what the men suffered constituted torture and had the European Court or Commission known about Ballykelly at the time and been in a position to properly investigate what happened there it might have come to the same conclusion,” said Ms Duddy.

Declassified documents uncovered by the PFC show how the British government in 1971 sought to justify use of the five techniques – hooding prisoners; forcing them to stand hooded with their hands against a wall; using disorientating “white noise”; sleep deprivation; and food and drink deprivation.

These methods were used against the 14 so-called “Hooded Men” who, after some 350 mainly nationalist people were interned in August 1971, were taken away for “deep interrogation” at Ballykelly. The interrogations were carried out by the RUC overseen by the British army.

Ms Duddy said that the papers cast new light on the nature of the interrogation. They also showed that details about Ballykelly were not disclosed to the European Court or Commission and to the earlier 1971 Compton inquiry into the allegations of brutality and ill-treatment of detainees. Compton found there was no brutality but there was physical ill-treatment.

One “secret” paper addresses how the British government should deal with the Compton report which was about to be published. This paper refers to a British army officer, Colonel Nicholson, one reference in the paper stating, “Col Nicholson said that it was very important to keep secure the existence and location of the centre at Ballykelly where the 12 detainees in question had been interrogated. It was not publicly known that this centre existed as well as others which were known.”

While Col Nicholson refers to 12 men two more were interrogated in such fashion in a “2nd operation” while the Compton inquiry was taking place.

In this paper planning how the British government might respond to the Compton findings Col Nicholson said “most of the detainees wanted to keep their hoods on in the cells quite voluntarily”. He also said that “his records showed that the complaints which were before the Compton Committee were largely fabricated”.

The official papers also stated that standing time “would never be more than six hours at a stretch because they had to be fed at that interval”. They also stated that “if a detainee collapsed he was allowed to get his second wind and was not put straight back to the wall”.

Ms Duddy said the evidence from the men was that they were relentlessly forced to maintain the standing position.

In 1972 the then British prime minister Ted Heath said the five techniques would not be used again.

Some of the surviving “Hooded Men” will recount their experiences at an event, “Beating Ourselves Up”, in the West Belfast Festival at noon today in St Mary’s University College on the Falls Road.