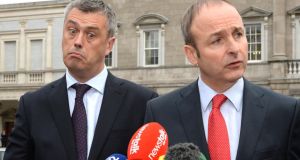 When he made the fateful decision to vote against his own party in last December’s budget, Colm Keaveney used a Latin phrase: “Alea iacta est”.

Its meaning: The die has been cast.

It referred to the decision by Julius Caesar to cross the river Rubicon, giving notice he was challenging the authority of Rome, to which he had sworn allegiance.

For a second time in this Dáil, Keaveney has gone on such a fateful journey. The first saw him exiting Labour and the next chapter was yesterday’s surprise disclosure.

His decision to join Fianna Fáil – and its decision to accept him – is the most high-level defection in parliamentary politics for quite some time. It is an intriguing and interesting prospect and will certainly provide a talking point in the days and weeks to come.

Political parties in opposition always love being able to announce that they have acquired a prize who has defected from another party. Fine Gael paraded Cáit Keane and Mary Mitchell O’Connor (both of whom were councillors at the time) and Ciarán Cannon when they left the PDs during the last Dáil term.

The message is obvious, adding credibility to the governing ambitions of an opposition party.

So for Fianna Fáil, Keaveney was presented as a coup, sending a signal to people who voted Labour in 2011 that they may present an alternative.

Sure, it also took a little sheen from the junior coalition party after a strong party conference at the weekend.

But there are a lot of circles to square when it comes to the 42-year-old Tuam politician. For one, Labour people quickly reminded us of some of the venomous anti-Fianna Fáil rhetoric of Keaveney in recent years, accusing the party of corruption, greed and graft.

His repeated response to that was that the party had changed and in Micheál Martin it had a leader who displayed humility as well as seriousness.

There’s an issue on the other side too. Former Labour colleague Eric Byrne put it well when he said Keaveney was a bouncing ball that Martin would have to learn to control. Keaveney was seen as a contrarian and maverick in Labour and often made public pronouncements at odds with the official line – prompting Pat Rabbitte to mock his frequent media doorstep interviews as “pirouetting on the plinth”.

As his former Labour colleagues (with whom relations have cooled) cried “caveat emptor”, Fianna Fáil’s Martin, when asked about dissent, said the party welcomed diverse views and would be happy to accommodate the ideas of a TD he described as a “serious politician”.

It’s clear that Keaveney was uncomfortable as an Independent and sees his future within a party. It’s inevitable that a new TD being foisted on the local constituency organisation will put noses out of joint. Keaveney toyed with a run for Europe, but Galway East is now likely to be his oyster.

The constituency has been reduced to a three-seater and Fianna Fáil is guaranteed one seat, but not two. Micheál Kitt is already the party’s sitting TD.

Most of the territory ceded to Roscommon came from east of the country where Kitt is based. If he does decide to stand in 2016, Kitt may move constituency.

All of that will have to be played out.