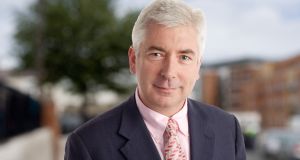 Minister Alex White: defeated Ministers no longer sit in the Dáil but they have access to their departmental offices

The senior and junior Ministers who lost their seats in the general election can remain in office until a new government is put in place.

Article 28.11.2 of the Constitution states: “The members of the Government in office at the date of a dissolution of Dáil Éireann shall continue to hold office until their successors shall have been appointed.”

Minister for Children James Reilly and Minister for Communications Energy and Natural Resources Alex White lost their seats. They both attended yesterday’s meeting and are legally permitted to remain in office for as long as it takes for a new government to be elected.

There has been speculation that they may resign if the Dáil fails to elect a new taoiseach when it meets next week. However, there is no obligation to do so and Government sources said yesterday that Taoiseach Enda Kenny would prefer if they remained in office until there is some clarity about the formation of the next government.

The defeated Ministers can no longer sit in the Dáil but will have accesses to their departmental offices. The same applies to the junior ministers. The Labour Party Ministers of State who lost their seats were Ged Nash, Kathleen Lynch, Aodhán Ó Ríordáin and Ann Phelan, while Fine Gael’s Tom Hayes, Jimmy Deenihan and Paudie Coffey also lost out.

Although junior ministers are appointed by the Government rather than the Taoiseach and do not receive seals of office from the President, they may also remain in office until they are replaced.

The Taoiseach has made it clear no important decisions or appointments will be made until the new Dáil elects a government.