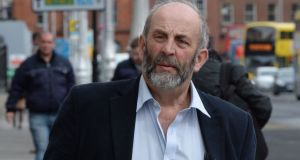 Danny Healy-Rae: Would shoot an intruder who came into his house, aiming for the legs first to immobilise them. Photograph: The Irish Times

Danny Healy-Rae has said Noah’s Ark is among the “facts” on which he bases his views on climate change.

In an interview published in Hot Press magazine today, the Kerry TD also said he would shoot an intruder who came into his house, aiming for the legs first to immobilise them.

In the lengthy interview he also touches on marriage, sex, attending funerals, abortion and the US presidency, saying he is “more in favour of the Clinton lady” becoming president than Donald Trump.

In the Dáil in May, Mr Healy-Rae dismissed the notion of man-made climate change, saying “God above is in charge of the weather”. Explaining his views to interviewer Jason O’Toole, he says that he based them on“facts”.

“The facts are there and history proves it,” he said.“We had the Ice Age. We had Noah’s Ark. We had all those stories . . .

“There were some centuries when the country was very hot and warm and then there were different centuries with so much rain and cold. So, those are facts.”

Asked if he thought people should be able to protect their properties by shooting intruders, he replied: “Your home is your castle. When I see what happens to elderly people, when someone comes in and beats them and robs them – yeah, I’d have no problem.”

“I’d immobilise them first, or something like that. If there was no other way of dealing with them. I’d have no problem with that. It’s ridiculous where the law actually favours the criminal in some of these incidents.”

The TD, who said he does not drink, also defended a proposal he made in 2013 to allow gardaí to give permits to people in rural areas to drive on local roads “in second or third gear” after two or three pints.