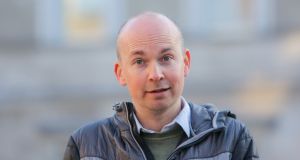 Paul Murphy claimed the Dáil’s standing orders or regulations were clear and allow for such a debate to take place and he was seeking five minutes in the Dáil to put the motion and vote on it. Photograph:Gareth Chaney/Collins

There was a renewed row in the Dáil over a rejection of Rise TD Paul Murphy’s call for a debate on the party’s proposal to initiate impeachment proceedings against Supreme Court judge Mr Justice Séamus Woulfe.

Mr Murphy claimed the Dáil’s standing orders or regulations were clear and allow for such a debate to take place and he was seeking five minutes in the Dáil to put the motion and vote on it.

However Ceann Comhairle Sean O Fearghaíl said standing orders were quite clear that there were two ways to deal with the motion. One option was to deal with it in Government time if the Government agreed, which it had not.

The other option was for Mr Murphy’s group, which also includes Solidarity People Before Profit, to use its private member’s time, which it has on Wednesday, to debate the issue. The group has a motion down to debate pay for student nurses.

It is the second week in a row that there has been a row over Mr Murphy’s motion to initiate proceedings against the judge over his attendance at the controversial dinner of the Oireachtas golf society in Clifden, Co Galway in August in the midst of Covid-19 public health restrictions. Mr Justice Woulfe was also criticised for his comments afterward about media coverage of the event.

Sinn Féin whip Pádraig Mac Lochlainn said there was “something of a challenge collectively for the Houses in the way the standing order is being interpreted” and questioned the scenario where a TD was not a member of a group and therefore not entitled to private member’s time.

The Ceann Comhairle told him “we cannot drive the horse backwards and forwards at the same time”.

He said “we have a highly reputable skilled and experienced legal team who work for us here in the Houses of the Oireachtas.

A vote was called on Tuesday’s Order of Business which the Government won by 32 votes to 12.

After the vote People Before Profit TD Bríd Smith said that “in all the time it has taken us to discuss this, it would have taken five minutes to take the motion on the Order Paper”.

Sinn Féin leader Mary Lou McDonald expressed concern that the matter should be deal with either way and be dispensed with. Otherwise it would remain on the order paper indefinitely and that would be an “extraordinary situation” given the seriousness of the issue.

Independent TD Mattie McGrath said there were no grounds for impeachment and it was “simply grandstanding and game playing” by Mr Murphy’s group.

Taoiseach Micheál Martin said they could not make up the rules as they went along. He said the Dáil reform committee had laid out standing orders and it was a “long standing precedent that the Ceann Comhairle, following advice, adjudicates on issues”.

He said “sometimes that adjudication does not find favour with some in the House, but that does not mean that those some can then dictate debates and dictate the agenda because it does not suit”.