Cynical Seanad abolition stunt must not be rewarded

Column: A reformed Seanad could resolve the central crisis of our political structure: the unaccountability of the government 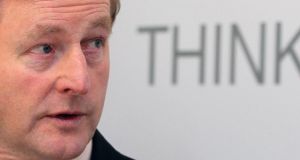 Taoiseach Enda Kenny: “had never taken a ‘leader’s initiative’ on anything in his life until October 17th, 2009.” Photograph: Niall Carson/PA

Let’s rehearse how the abolition of the Seanad proposal emerged. On July 24th, 2009, Enda Kenny said at the MacGill summer school: “I see a new role for the Seanad entirely. The system of voting has got to be changed. Every graduate should be entitled to vote for the Seanad. I see real opportunities for connection with Europe. It should be the forum where MEPs can address the Seanad. It should be able to examine European legislation in a real scrutiny way. It should be a forum where delegations can come and make their case on national issues and the whole lot of it should be on a parliamentary (television) channel.”

Outmanoeuvred
In October 2009 the controversy broke over the expenses of John O’Donoghue, then ceann comhairle, while he was a minister in the 2002-2007 government. Enda Kenny was outmanoeuvred by Eamon Gilmore’s then characteristic bombast in leading the assault on the embattled ceann comhairle, who was forced to resign on October 13th, 2009. There were murmurings in Fine Gael about Enda Kenny’s leadership.

Four days later, on October 17th, 2009, at what is called the Fine Gael presidential dinner, Enda Kenny has this to say: “I believe the Seanad should be abolished and the next Fine Gael government will put this to the people. I have come to the conclusion that a second house of the Oireachtas can no longer be justified”.

Two days later, speaking on radio, he was asked why he had proposed this in advance of full consultation within his party on the issue, especially when seven months earlier the party had published a document advocating the reform of the Senate, not its abolition.

He replied: “The Senate has outgrown its usefulness. I have tried very hard to justify the existence of the Senate over a period . . . its legislative function has faded, particularly since we abolished the dual mandate [ie politicians servicing as both councillors and parliamentarians]. This is something I have been considering for some time.

“When I was up at the MacGill summer school in Glenties in July. I made it perfectly clear that I was considering a radical agenda in terms of how we do politics in Ireland. I signalled that . . . I have taken a leader’s initiative in this and this is what leaders are for . . . This mind is not for changing on this”.

Enda Kenny had never taken a “leader’s initiative” on anything in his life until October 17th, 2009. He had been in the Dáil for 34 years by then and nobody I have spoken to can remember a single initiative he ever took on anything or any indication that he had reflected at all on any political reform or anything else of consequence in that third of a century. Certainly not a word about Seanad reform or abolition.

That a major change to our political institutions should have been prompted by a stunt, and almost certainly nothing else, to ease political pressure at a time of peril to the career of a political dilettante, is beyond depressing. But that is the calibre of our politics nowadays.

That absence of accountability could be addressed simply by having the Seanad directly elected by the people on the basis of the European Parliament constituencies and giving the Seanad the same powers as the Dáil, except the power to elect and unelect a government.

Only in freak circumstances (as in 2011), would the government ever have an overall majority in the Seanad (it would need close to 50 per cent of the popular vote for that to happen) and therefore accountability could be exercised via the directly elected Seanad.

And precisely because this Government is determined to avoid accountability, this will not happen.

If a government were concerned to give the people a choice on how our parliamentary institutions should be modelled, the people would be given a choice between the abolition of the Seanad and the reform of the Seanad. But the people are denied this choice and are being asked to vote on this in the prologue to Budget 2014. A double stunt on top of the original stunt.

Such premeditated cynicism must not be rewarded.