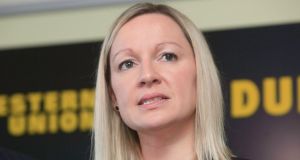 Miniser of State for European Affairs Lucinda Creighton has expressed strong opposition to the inclusion of suicide ideation in the proposed Protection of Maternal Life Bill 2013. Photograph: Gareth Chaney/Collins

Minister of State for European Affairs Lucinda Creighton has denied she faces a dilemma in balancing her career and personal moral judgment when it comes to voting on abortion legislation.

The Fine Gael Minister has expressed strong opposition to the inclusion of suicide ideation in the proposed Protection of Maternal Life Bill 2013.

Speaking in Dublin this afternoon at the Chartered Accountants Leinster Society, she said there were two parties in Government and strongly held views in all parties in the Oireachtas.

“I have never had any issue with coming down on the side of my own moral judgment in any issue, so I think that’s not a dilemma for me at all. I’ll just obviously be very interested to see the text of what’s agreed by Cabinet today - if indeed it is agreed and I don’t know,” she said.

Everybody had a right to express their opinion and vote according to that, she said.

Ms Creighton said she had expressed her view on the issue but she had no intention of speculating about her political future or voting intentions. The process would take a number of months, she added.

“Obviously we’ll go through the normal procedures in the Oireachtas. Firstly within our own parliamentary party and through the health committee and Oireachtas debates,” she said.

“I have obviously expressed my view on this issue and I want to work with the Government to ensure that we can arrive at legislation that will protect women’s lives and protect the lives of unborn babies and ensure all members of Government and of the parties supporting the Government can live with the legislation proposed, and vote for it ultimately.”

Taoiseach Enda Kenny earlier said he is hopeful the heads of the Protection of Maternal Life Bill 2013 can be agreed at Cabinet and sent to an Oireachtas committee. The Cabinet is expected to agree today on the legal framework for abortion in defined circumstances where a woman’s life is in danger, including the threat of suicide.

Final agreement between Fine Gael and Labour on the heads of the Bill was reported to be close last night after protracted negotiations on the number of doctors to be involved in making a decision on a suicide threat.