Crashed deadlines and confusion as Cabinet signs off on Bill 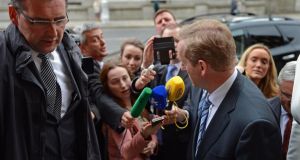 Taoiseach Enda Kenny is threatened with the loss of five or six TDs and Senators if they vote against the abortion Bill. Photograph: Eric Luke

It was a day of crashed deadlines, rampant speculation and no little confusion over the exact contents of the Protection of Life During Pregnancy Bill.

Although the Cabinet finally signed off on the draft law a little after 2pm, Enda Kenny’s pledge to provide copies first to his own TDs and Senators meant formal publication of the text was not planned until after the meeting of the Fine Gael parliamentary party.

The meeting was apparently calm enough, and followed separate talks between Mr Kenny and his Senators on the referendum to scrap the upper house.

The parliamentary party meeting broke up shortly before 9pm, but there was still no sign of the legislation itself at 11pm as drafting work continued on the final text.

Under discussion since the start of the week is the full Bill, which was in its 10th or so version by the time it went to Cabinet yesterday. The document followed 51 drafts of the heads of the legislation.

This is highly complex legally, highly sensitive politically and comes with the Government on the receiving end of an onslaught from the Catholic Church and anti-abortion campaigners. This is to say nothing of jitters within Fine Gael, with Mr Kenny threatened with the loss of five or six TDs and Senators if they vote against the Bill.

The view in political circles last night was that the full text of the legislation would be unlikely to sway any of the most ardent dissenters.

At the same time, there was some anticipation in Fine Gael circles that new powers giving the Minister for Health the right to direct a hospital to suspend services under the law might provide some comfort to those who fear the legislation would open the abortion floodgates.

This right, which was not included in the original heads of the Bill, is reserved for cases in which there is “a serious risk to a person receiving services or where there is failure to comply with the provisions of the act”.

Reporting mechanism
Measures discussed to provide a direct reporting mechanism to the Oireachtas on the operation of the law did not make it into the final text. While this dismayed at least one Fine Gael doubter, the Bill provides for an annual report on the appeals process from the Health Service Executive to the Minister.

The anticipation in Government circles is that the Minister would make the report public, and he is said to promised last night to do so.

This is in addition to a notification process under which each institution is obliged to keep records and report to the Minister.

There are other changes within the final agreement. Terminations will be not be reserved to maternity hospitals, meaning for example that there would be no obligation to transfer a gravely ill patient to the Rotunda Hospital in Dublin from the Mater or other named major hospitals. There was some concern, however, to avoid a situation in which this allowed private clinics to provide services under the law.

There was, however, concern to avoid too loose a definition that would provide an opening for non-specialists.

Other changes would confine the right to call in a patient’s general practitioner to cases in which she agrees with that.The scope of the offence for breaching the law has also been narrowed. While the heads said it would be an offence to carry out an act intended to destroy unborn human life, this is now reserved for the intentional destruction of life. A planned illegal destruction of life which does not proceed or succeed is no longer included.

Fine Gael’s TDs and Senators had been told they would be treated to a full briefing on the Bill at 5.30pm by Minister for Health James Reilly. At that time, however, Dr Reilly was on his feet in the Dáil discussing another draft law altogether, namely the Health Service Executive (Governance) Bill.

Locked in exchanges
The Minister was still in the House one hour later, locked in exchanges with his former junior minister Róisín Shortall, Billy Kelleher of Fianna Fáil and Caoimhghín Ó Caoláin of Sinn Féin. A vote on the HSE Bill was called at 6.45pm, suggesting it would be a while yet before the main event.

It was one of those days. The Cabinet was to meet at 8am to discuss the definitive version of the Bill. In the event an agreed text did not emerge from the office of the Attorney General until 7am, pushing the Cabinet meeting out to 9.20am.

The Cabinet talks were suspended after an hour, to allow the Taoiseach take Leaders’ Questions in the Dáil. It was there, questioned by Independent TD Mattie McGrath, that Mr Kenny declared himself to be a Taoiseach who happened to be a Catholic rather than a Catholic Taoiseach.

It was a long old day, with more to come if the Government is to succeed in enacting the Bill by the summer recess.