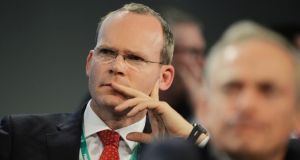 Minister for Agriculture and Defence Simon Coveney has called for a “conversation” about what is driving asylum seekers to protest about their rights and conditions in various centres around the country. Photograph: Alan Betson / The Irish Times

Minister for Agriculture and Defence Simon Coveney has called for a “conversation” about what is driving asylum seekers to protest about their rights and conditions in various centres around the country.

Mr Coveney said he did not want to make any commitments but the Government should respond in a way that was “compassionate, humane and consistent” and in keeping with the approach of a modern and progressive country.

“And have a conversation about what’s driving them to protest and to see whether the Government can respond to that in a way that is compassionate, humane and consistent with a modern progressive country like Ireland. ”

He was speaking on his way into the Cabinet meeting in Government Buildings early this morning.

Meanwhile, independent Senator Rónán Mullen will call on the Government to establish female-only and family-only reception centres and grant the right to seek employment.

“People in prison have a date on the door. People in direct provision do not. They don’t know when they will have the freedom to do the simple ordinary things of life like cook a meal or get a family pet,” Mr Mullen said.

He said managing an asylum policy was never easy for any country but changes in the operation of the direct provision system were needed urgently.

He will hold a press conference outside Leinster House ahead of the Seanad session. He will be joined by Senator Paul Bradford, asylum seekers from the Mosney and Portlaoise reception centres, and representatives of Spirasi support organisation for victims of torture.

“In big ways and little ways, human dignity is disregarded. A woman told me how, several weeks over, she spent had to spend 30 per cent of her weekly allowance of €19.70 on prescription charges” Mr Mullen said.

“Other women spoke to me about the lack of privacy, having to share a room with strangers. Or having children inappropriately quartered with adult family members in a way that hasn’t been seen in Ireland since the 19th century.”