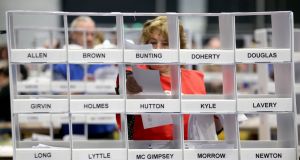 A count supervisor sorts voting papers at the Titanic Exhibition Centre, Belfast, after elections to decide the make-up of the next Stormont Assembly. Photograph: Liam McBurney/PA Wire

With counting underway across Northern Ireland, perhaps now is a good time to take stock of what exactly is happening.

The basics: There are 108 seats in the Assembly up for grabs. Northern Ireland is divided into 18 constituencies – the same areas that elected 18 MPs to Westminster last year. However, over the next two days, there will be six candidates elected in each of those 18 constituencies.

And the count: All 108 members of the Assembly are elected using the Single Transferable Vote system or STV, a system which residents of the Republic of Ireland are very familiar with. With ballot boxes opened this morning, the first step is to work out the ‘quota’, which decides how many votes a candidate needs to be elected (to calculate the quota, you divide the number of valid voting papers cast, by the number of seats to be filled plus one, and then add one). Candidates who exceed the quota are elected straight away of course.

So when should we expect white smoke? There was much criticism during and after the 2011 election concerning the snail-like pace of the Northern Ireland count. Many constituencies did not announce a first count until late on Friday evening (eg the first count for Mid Ulster was declared at 11pm on Friday night).

A subsequent report by the NI Electoral Commissioner blamed poor organisation, and staff not turning up (at one count centre 45 failed to show!). It should be noted, though, that there were local council elections in Northern Ireland at the same time (as well as a referendum on voting reform). Therefore, there are hopes everything will go a little smoother and quicker over the next couple of days.

The quickest in terms of the number of hours spent verifying and counting ballots in 2011 was South Antrim (10 hours). It was a tie for the longest, with Belfast West and North Antrim both taking 23 hours each!

The Irish Times coverage? We will, as ever, bring you the latest news, with articles on each of the constituencies, a live blog, as well as the overall picture of how things stand at the moment.

You can also use our Mini site – Assembly Election 2016 – to easily navigate all the Assembly coverage, and, as candidates turn into MLAs, our Assembly Results Hub will bring you the updates.

It’s not too late to check The Irish Times’ previews and predictions for each of the constituencies. (unless the predictions turn out to be wrong!)

The DUP, Sinn Féin, SDLP and Alliance all entered 2016 with the same number of seats as they won in the 2011 election. However, the UUP have only 13 outgoing MLAs, as three left the party during the last Assembly term. David McNarry resigned from the UUP in 2012 and joined Ukip. He is not seeking reelection. Basil McCrea left in 2013 and set up NI21. He also did not contest the 2016 election. John McCallister also left the UUP to co-found NI21, but resigned from the new party in 2014 to become an Independent.

The parties: You are probably familiar with the main five or six political parties, but around 20 parties were represented in the 2016 election.

Cannabis is Safer than Alcohol

So what’s the Assembly actually do? Hmmm. We’ll resist the temptation to be sarcastic.

The Assembly is the devolved legislature for Northern Ireland – so it can debate matters and pass laws in areas such as health and education, and it is also tasked with scrutinising the work of Ministers and Government Departments . Of course, the Assembly does not have control over many issues, such as foreign policy.

The Northern Ireland Assembly was included in the terms of the Belfast Agreement, with the first election held on Thursday, June 25th, 1998.

A “First Minister” and “Deputy First Minister” are elected to lead the executive committee of Ministers. The two must stand for election jointly and, to be elected, they must have cross-community support by the parallel consent formula (which means a majority of MLAs who have designated themselves Nationalists, and those who have designated themselves Unionists, and a majority of the whole Assembly, must all be in favour).

To complicate things even further, each party has a designated nominating officer and the d’Hondt procedure is used for the appointment of ministers in proportion to their party strength.