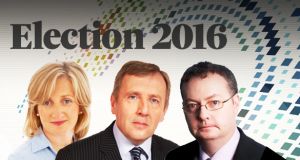 Fianna Fáil has narrowly seen off the challenge of Independent JP O’Shea to secure two seats in Cork North West.

It was a case of Dial M for Moynihan, with two unrelated Fianna Fáil TDs of the same surname securing a seat each in the three-seat constituency.

New candidate Aindrias Moynihan won the most first-preference votes, and for some time it appeared he would unseat not only sitting Fine Gael TD Aine Collins, but also his running mate and namesake, incumbent TD Michael Moynihan.

There were still two seats to fill at the ninth count, when Aindrias was elected to raucous acclamation, minutes before Michael Moynihan was narrowly edged out Independent JP O’Shea for the third seat - by just 249 votes.

The first Independent mayor of Cork County, O’Shea topped the poll locally in Kanturk-Mallow, which also straddles Cork East. His first-preference vote was just 4,813, although he picked up huge transfers from Sinn Fein and other Independents.

Independent Alliance candidate Diarmuid O’Flynn was eliminated on the fifth count after polling 2,159 votes, a disappointing return for the anti-bondholder campaigner, who garnered over 30,000 votes in the European elections.

Sitting Fine Gael TD Michael Creed was the first to be elected after securing transfers from his fellow Fine Gael TD Collins, who was eliminated on the seventh count, after falling into fifth.

“It is heartbreaking, of course,” Ms Collins said. “It’s very disappointing, because we worked very hard, we had a very good campaign. Michael Creed and I had a very fair campaign, we divided the constituency equally and respected that divide.”

Creed, scion of a family dynasty that has supplied TDs to this constituency since 1965, garnered 8,869 first-preference votes. He gained steady support from his base in Macroom and suburban Ballincollig, the latter something of a cuckoo in the nest in this rural, conservative constituency.

Yet Creed was in no mood to celebrate.

He said the onus is on the parties “that won the election”. “The public largely voted against the government, and I don’t feel we have a mandate to govern.”

Several other Fine Gael sources said they suffered from poor vote-management in this sprawling constituency, which stretches from Togher near Dunmanway in west Cork, to Cuil Aodh on the Kerry border, to Charleville in the far north, to the western outskirts of Mallow, and the large multinational hub of Ballincollig, abutting the city.

“We worked hard at our vote management and it’s paid off,” a victorious Aindrias Moynihan said.

“People have been voting out Fine Gael,” he added. “It wouldn’t make sense for us to be voting them back in. We should be sticking with those who voted for us.”