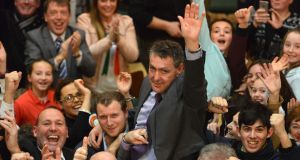 The four seats of Cork North-Central have been filled with Fianna Fáil, Fine Gael, Sinn Féin and the Anti-Austerity Alliance-People Before Profit each taking a seat.

Minister of State Dara Murphy took the last seat in the constituency on the 11th count but was about 1,000 votes short of a quota.

Fianna Fáil health spokesman Billy Kelleher was the first TD elected in the constituency, exceeding the quota by some 4,000 votes on the first count.

Mick Barry of the AAA-PBP took the second seat on the seventh count before Sinn Féin’s Jonathan O’Brien took the third.

The eleventh and final count in Cork North Central completed a miserable election for Labour in Cork city with Minister of State, Kathleen Lynch losing out for the final seat as she joined her her brother-in-law, Ciaran, who lost his seat in neighbouring Cork South Central, in the ranks of the defeated.

The general election mirrored the local elections in 2014 in Cork city for Labour when the party lost all its seven councillors with only Cork East Labour TD, Seán Sherlock bucking the trend and holding a seat for the party in any of the five cork Dailconstituencies on this occasion.

Mr O’Brien topped the poll in 2011 to become the first TD elected under a Sinn Féin banner in Cork city since the 1920s but this time out the party had opted to run two candidates in Cork North Central so he had to split his vote with running mate, Cllr Thomas Gould.

Mr O’Brien’s election was greeted with a chorus of cheers and applause by his expectant supporters before they broke into a chorus On the One Road which echoed around Cork City Hall.