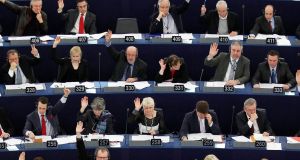 Any new relationship agreement concluded between the EU and the UK will have to get the consent of the European Parliament. Photograph: Vincent Kessler/Reuters

The procedure that the UK must now follow if it is to leave the European Union is a two-year one set out in Article 50 of the Treaty of the European Union. Any extension of the two-year deadline requires the consent of all EU member states.

There is nothing in the treaty that provides for the revocation of a withdrawal application, but likewise nothing that says the parties concerned cannot agree to suspend the process.

Any new relationship agreement concluded between the EU and the UK will have to get the consent of the European Parliament and a qualified majority of the European Council. UK MEPs would be allowed vote on the deal.

The European Council comprises a government leader from each member state plus the council’s president. A qualified majority would be at least 72 per cent of the council, representing at least 65 per cent of the EU’s population, with the UK being excluded in both measurements.

If a deal is not agreed within the two year time period, then an extension can be granted. However this requires the unanimous consent of all member states.

“If everyone does not agree [to an extension], then they [THE UK]are out in the cold,” according to Gary Fitzgerald, director of the Irish Centre for European Law, at Trinity College, Dublin.

Such a development would mean a border between the Republic and the UK equivalent to the one between Poland and Ukaine, he said. It would also mean that, for trade purposes, the UK would have to fall back on World Trade Organisation arrangements. “They would be outside the single market,” Mr Fitzgerald said.

Article 50, which is very short, is focused on the procedural aspects of the withdrawal process, which involve the State wanting to leave beginning the process by way of an application to the European Council. There is nothing in law to say that a State that has voted to leave the union, must initiate the process within any particular deadline. The process for leaving the EU has yet to be triggered by the UK and how or when the UK will go about doing so is not clear.

Once the application is received, “the [EU]shall negotiate and conclude an agreement with that State, setting out the arrangements for its withdrawal, taking account of the framework for its future relationship with the Union,” the treaty states.

While the negotiations are ongoing, the relationship between the EU and the applicant state remains the same, other than the fact that within the council, the UK will not be able to take part in any discussions that affect its pending withdrawal.

The agreement on withdrawal “shall be concluded on behalf of the Union by the Council, acting by a qualified majority, after obtaining the consent of the European Parliament.

The European treaties “shall cease to apply to the State from the date of entry into force of the withdrawal agreement or, failing that, two years after the notification..., unless the European Council, in agreement with the Member State concerned, unanimously decides to extend this period.”

A driving force in the Brexit campaign was dislike of the fact that citizens of EU member states in Eastern Europe had freedom of movement rights within the EU , Mr Fitzgerald pointed out. But now all EU member states, including those in Eastern Europe, have a right to “put the UK out in the cold”, if a withdrawal deal is not agreed within two years of an application to leave being made.

The treaty is silent as to what happens to the ticking down of the two-year timeframe in the context of appeals by any member state to the European Court of Justice concerning any proposed measure for the withdrawal arrangement.

According to the European Parliament’s website, the timing of notification of a desire to withdraw is “entirely in the hands of the Member State concerned, and informal discussions could take place between it and other Member States and/or EU institutions prior to the notification.”

There is nothing in European law, according to the parliament’s website, that prevents the UK adopting any new EU act during the period when the withdrawal negotiations are under way.

While there is no veto for any member state in relation to the UK’s right to leave the EU, treaty changes or international agreements such as free trade agreements, that might be necessary as a result of the UK’s withdrawal, would need to be ratified by the remaining Member States.

Mr Fitzgerald said it is his view that the UK will be in a very weak position in its negotiations with the EU, as it will be crucial for the interests of the EU that it ensures no competitive advantage arises for the UK vis-a-vis other countries involved in EU trade.

If the UK joins the European Economic Area, in a way similar to Norway, then it will have to agree with the free movement of workers, as well as goods and services, as well as with European environmental and social protections, as to do otherwise would be to confer a competitive advantage.