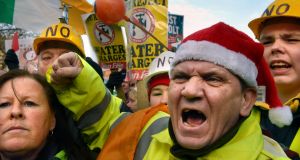 “Getting people out on the street is the objective, rather than the particular issue that is being protested against.” Photograph: Brenda Fitzsimons/The Irish Times

In 2014, in the context of the then pending European Parliament elections, People Before Profit (PBP) candidate Brid Smith was asked on Tonight with Vincent Browne on TV3 about her seeking election to a parliament she despised. She responded by speaking about the importance of mobilising people and forcing those in power to alter their policies in response to street protests.

Election to parliament would provide a platform for promoting people power, Smith said. She is now a member of the Dáil.

On the day the current Dáil was convened for the first time after the general election, Richard Boyd Barrett, who had been re-elected as an Anti-Austerity Alliance-People Before Profit (AAA-PBP) TD, gave an impassioned speech outside Leinster House where he described it as “a circus”. In the way that people power had pulled down the Roman Empire, he said, the Oireachtas would also be destroyed by opposition from the street. (He didn’t mention the role played by the Visigoths in the collapse of Imperial Rome.)

One of the biggest people power movements in recent times was the campaign against paying for having rubbish collected. For many in the PBP-AAA camp, that campaign against bin charges was the launchpad for their public careers, and a model for the way forward. Yet there are obvious problems with viewing the anti-bin tax campaign as a success. First, and most obviously, bin charges were introduced. That decision wasn’t taken by Boyd Barrett or Smith and their PBP-AAA colleagues, but the first step surely in measuring the success or otherwise of a campaign of resistance is to ask if it achieved its stated objective.

But the anti-bin tax campaign was worse than just a failure. What had been a service delivered by local councils eventually became a service delivered by private waste disposal businesses, in competition with each other, some of them owned by way of offshore corporate structures. The bin charges campaign contributed to the local councils’ enthusiasm for exiting the waster collection business.

Work that had been done by men who had permanent, reasonably well-paid jobs, public service pensions and good employment conditions became the work of people whose pay and conditions are markedly different, and for the worse.

Again that’s not the fault of the PBP-AAA but it is a wonder that the members of the movement don’t occasionally pause and fret over how the waste charges issue has played out. Did the campaign against paying the charge feed into, or facilitate, the decision to privatise the service? Did what was nominally a campaign on behalf of the working class, have the net effect that rubbish that was formerly collected by men with good working conditions, is now collected by men with enormously reduced working conditions? Is there not something to be learned from this?

But perhaps that is the wrong question to ask. Because what the PBP-AAA want is to bring down the whole system. Getting people out on the street is the objective, rather than the particular issue that is being protested against. Seen from this point of view, the campaign against bin charges was a success. The charges, the working conditions of the people who empty the bins, the efficiency of the service; they are all neither here nor there in the context of the greater struggle.

The bin charges campaign was a minnow compared with the whale that is the campaign against water charges. It has been such a success that the two largest parties in the State almost found themselves unable to form a Government, such is their respective fears over policy choices in relation to our water pipes and sewers.

It has become the Opposition issue that out-boxes all others. Fianna Fáil appears prepared to trash an attempt to fix the State’s broken water and sewerage services, because of its concerns about Sinn Féin’s nibbling at its electoral bum. Sinn Féin did a volte-face on the water charges issue because of the PBP-AAA’s Paul Murphy, and his nibbling at Sinn Féin’s electoral bum. Reason has been thrown out the window.

The campaign to prevent the creation of a water utility that can raise its own money and pay its own bills is one that will cost the State, and its citizens, dearly. The people will still pay for water and waste services, but because of the “success” of the campaign against water charges, they’ll pay more, and get less. And yet, in the eyes of the PBP-AAA, things have never looked so hopeful. It’s another success; another step in the process of tearing the whole system down.

From bank bailouts, to stagnating wages, to failed states on Europe’s borders, the Western world’s economic system is under serious pressures, the causes of which are numerous and the subject of endless debate. One thing is clear however; the solutions are neither easy nor obvious.

The difficulty the system is having in coming up with solutions is surely the explanation for the political “success” of Donald Trump, the Brexit campaign, the Front Nationale, the right-wing Freedom Party in Austria, and, closer to home, the independents, the PBP-AAA, and even Sinn Féin, with its scandalously positive attitude towards the illegal and violent activities of its recent past.

It is easy to foresee a future in the West where there will be widely differing degrees of success among nations in dealing with the pressures that exist. The levels of dysfunction that may or may develop within any particular country or community (with inequality being one measure of dysfunction), will be dictated by the quality of the decisions made when addressing the problems that have to be confronted.

From Ireland’s point of view, the key player is the Oireachtas. Electing people to the Oireachtas so they can protest, rather than govern, is another protest we’ll all pay dearly for.