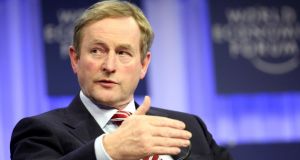 Enda Kenny: There will be “an overall economic road map to grow the economy, to deliver full employment”. Photograph: Chris Ratcliffe/Bloomberg

The Coalition is considering using its spring economic statement to outline a five-year tax reform plan as part of a springboard to try and secure a second term in office.

Senior Coalition sources said that while the tax reform template for the next budget has already been set – a repeat of the changes made for 2015 – a five-year outline may be provided to show what Fine Gael and Labour hope to do with a second term in office.

It is not yet clear what specific reforms a five-year plan could outline, although TDs from the Coalition parties have made repeated calls for reform of the Universal Social Charge (USC).

The spring statement will include updated figures and targets for the economy and employment. And senior sources have said a five-year tax initiative – which would effectively form the core of a re-election pitch – is under consideration.

It is understood Fine Gael is keener on the idea than Labour.

“We are going to use every opportunity to cut income tax,” said one source. “All we will talk about is jobs and income tax.”

Taoiseach Enda Kenny and Tánaiste Joan Burton announced on Wednesday that the Coalition has brought forward by two years its target for achieving full employment, from 2020 to 2018.

If re-elected the Government will also follow the 2015 tax-cuts model for the first budget of its second term, budget 2017, focussing on what Minister for Finance Michael Noonan has defined as the “squeezed middle”: those who earn between €32,800 and €70,000.

Others in Government struck a more cautious note about a five-year tax plan, adopting a “let’s see” approach.

“The main focus will be on the path to full employment, timeline for elimination of the deficit and fiscal space for capital investment,” said one well-placed figure.

It is anticipated the spring statement will also show the parameters for all possible future spending, including tax cuts, although more complete data will not emerge until close to the October budget.

Tánaiste Joan Burton has already said the forthcoming statement may be used to announce capital investment projects like schools and hospitals.

However, a capital spending programme may be announced before the statement, said sources.

Mr Kenny said the Government agreed there will be “an overall economic road map to grow the economy, to deliver full employment, to balance the public finances to be published and debated in the spring as what we call the spring economic statement”.

While not expected to be anywhere near as detailed as a full budget, the statement is expected to be more substantial than documents such as the Coalition’s statement of priorities published last summer, which largely dealt in broad outlines.