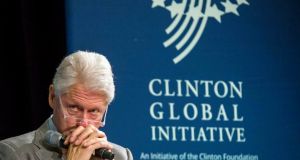 Conservative author Peter Schweizer, a former speechwriter for Republican president George W Bush, has claimed in his book “Clinton Cash: The Untold Story of How and Why Foreign Governments and Businesses Helped Make Bill and Hillary Rich” that Hillary Clinton made policy decisions while US secretary of state that benefited donors to the Bill, Hillary and Chelsea Clinton Foundation. Photograph: Brendan McDermid/Reuters

The publisher of a controversial new book that looks at the ties between Bill and Hillary Clinton and donors to their charity has made several factual corrections in an updated version, including references to billionaire Denis O’Brien.

Conservative author Peter Schweizer, a former speechwriter for Republican president George W Bush, claimed in his book ‘Clinton Cash: The Untold Story of How and Why Foreign Governments and Businesses Helped Make Bill and Hillary Rich’ that Hillary Clinton made policy decisions while US secretary of state that benefited donors to the Bill, Hillary and Chelsea Clinton Foundation.

Republican rivals seized on Mr Schweizer’s findings to criticise Hillary Clinton, a 2016 Democratic presidential candidate, when exclusive snippets from the book appeared in certain US media.

Her campaign team dismissed the book as a “smear project” and maintained that Mr Schweizer produced no evidence showing that she personally took decisions at the State Department that helped contributors to the family’s charity.

On Tuesday, online retailer Amazon alerted purchasers who bought the eKindle version of the book, published in print on May 5th, that an updated version of “your past Kindle purchase” was now available and that “significant revisions have been made.”

One passage in the original version of the book read: “O’Brien arranged at least three lucrative speeches in Ireland, for which Bill [Clinton] was paid $200,000 (€174,718) a piece, as well as a speech in Jamaica. ”

The revised passage in the updated eKindle version reads: “O’Brien arranged speeches in Ireland, as well as a speech in Jamaica.”

The updated version, in the same paragraph, also clarifies the timing of when Mr Clinton was flown to Ireland on Mr O’Brien’s jet to deliver a speech at the Global Irish Economic Forum in Dublin Castle to 2011.

Mr Schweizer initially alleged in his original book that Mr O’Brien’s company Digicel received funds from the State Department, when Mrs Clinton was secretary of state, through an initiative to help Haitians access money services through their mobile phones when Mr O’Brien was arranging lucrative speeches for Mr Clinton.

A Clinton spokesman told the news website Buzzfeed that neither the former president nor the Clinton Foundation was paid for two of the three speeches Clinton gave in Ireland and that the foundation received a donation after a speech he gave in Ireland in September 2010 but Mr Clinton himself was not personally paid for the speech.

Mr O’Brien’s spokesman James Morrissey said the businessman was not involved in getting the changes made to Mr Schweizer’s book.

The speech was sponsored by a company called Whisky Productions in partnership with Mr O’Brien’s Digicel.

The Haiti Mobile Money Initiative was a partnership between the Bill & Melinda Gates Foundation and the US government through the US Agency for International Development set up in June 2010, six months after the earthquake that devastated the Caribbean country.

CBS News quoted a spokeswoman for HarperCollins, which published Mr Schweizer’s book, saying that there were “seven to eight factual corrections” made to the book after the first printing and that the changes were “quite minor.”

The Clinton Foundation lists Mr O’Brien as a donor to the sum of between $5 million and $10 million, including contributions made in 2014. The foundation only provides details of donations in ranges.