Clare Daly’s bill may cause breaking of the whip

Analysis: Will the bill calling for abortion in the case of fatal foetal abnormalities expose would-be-rebels? 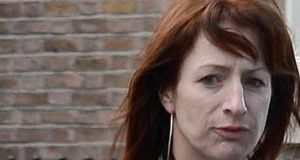 Clare Daly’s Bill calling for abortion in the case of fatal foetal abnormalities will be put to a vote on Tuesday. Photograph: Brenda Fitzsimons / THE IRISH TIMES

Clare Daly’s Bill calling for abortion in the case of fatal foetal abnormalities will be put to a vote on Tuesday, and Monday night saw Labour’s Anne Ferris confirm she will break ranks with her party and Government colleagues.

Ms Ferris, a Wicklow deputy, told The Irish Times she believes the issue is above politics and fully expects to lose the whip. Appearing on RTÉ’s Claire Byrne Live last night, she also said the vote is a matter of principle on which she is unwilling to yield.

Ahead of a busy parliamentary day, the focus will now switch to the other Labour deputies who may break the whip: Clare’s Michael McNamara, Dublin Bay North’s Sean Kenny, Waterford’s Ciara Conway and Meath East’s Dominic Hannigan. The vote will be held after the Order of Business, with the result around 5pm. There are also suggestions some deputies may go missing for the vote.

McNamara and Kenny have said they will decide their approach after a briefing by Minster for Communications Alex White on the AG’s advice. Máire Whelan has said the bill is unconstitutional.

The vote is Joan Burton’s first rebellion as Labour leader and every effort will be made to contain it. Burton held a meeting with party whip Emmet Stagg and parliamentary party chairman Jack Wall yesterday at which they discussed the vote, among other issues.

They will not be happy to read party grandee Fergus Finlay&#8217;s Examiner column this morning . “If I were a member of the Dáil, and irrespective of what the party whip might say, I’d vote for Clare Daly’s bill,” he says.

On MOnday night, sources at the top of the party were relaxed about the vote and were not entertaining any ideas of a wide rebellion. Wall even said he expected nobody to break the whip, but Ferris has proven him wrong.

When Fine Gael faced their own internal difficulties on the Protection of Life During Pregnancy Bill, Enda Kenny told any would be rebels they would not stand for the party come the general election. While it is hard to see Burton making similar threats, she will have to choose her own stick.